A preview of Silverstone Classic 2011, with lots of Formula 1 cars and motorsport legends present 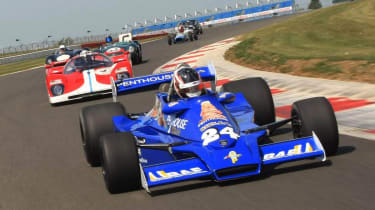 Silverstone Classic, the world’s biggest classic motorsport festival, takes place next weekend. It runs from July 22 to 24, and celebrates its 21st anniversary in 2011. The event will feature the biggest gathering of Grand Prix cars ever seen.  The Grand Prix Masters series will field a 32-strong grid of DFV-powered cars from the 1970s and early 1980s. Special appearances include an ex-Andretti Lotus 79 and ex-Fittipaldi McLaren M23. The HPGCA Pre-66 Rear Engine Grand Prix grid will feature no fewer than 50 cars, including the Lotus 25 that helped Jim Clark win the 1963 World Championship. Other big draws among the weekend’s 22 races will be the Group C field and E-Type Challenge. International race groups will be based at Club corner in the new F1 pit, while saloons and national races will be behind the old pits, with buses to link the two. There will be appearances from the likes of Richard Attwood, Jackie Oliver, Arturo Merzario and John Cleland. Call 08712 310 849 or head to Silverstone Classic website for tickets Click here for a gallery of Silverstone Classic images