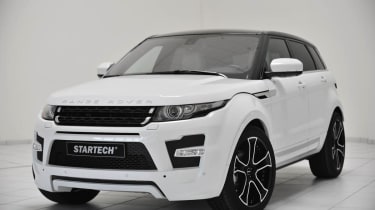 The new Range Rover Evoque has barely touched down, but it's already been chosen for some 'styling upgrades' from Brabus's subsidiary, Startech.

Startech's tweaked and (slightly) tuned version of the British SUV made its debut at the Dubai motor show  and features 21-inch wheels, new bumpers front and rear, plus deeper side sills and interior mods including a cross-stiched leather dashboard. Buyers will be able to choose from different components, or go for the whole package.

In addition to the cosmetic makeover, Startech is offering sports springs, which drop 35mm from the Evoque's ride height and work with the production shock absorbers. Power tweaks will follow, with Brabus confirming that it's working on a Startech engine upgrade for the 2-litre petrol turbo version of the Evoque.

The Startech brand was previously associated with Brabus's Chrysler-tuning efforts during the American company's ill-fated Mercedes partnership, but now it's being expanded to incorporate cars from other manufacturers - with emphasis on both Jaguar and Land Rover.