The Detroit show is light on supercars this year, with no Ferrari, no Lamborghini and no Aston Martin. There was however this, the Falcon Motorsports F7 – designed and built in Michigan. 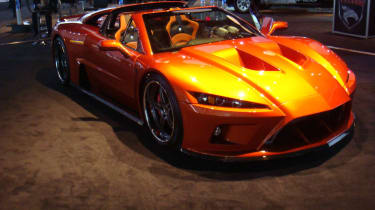 The Detroit show is light on supercars this year, with no Ferrari, no Lamborghini and no Aston Martin. There was however this, the Falcon Motorsports F7 – designed and built in Michigan.

The F7 is the first car produced by a company that started out making aftermarket styling kits for the Dodge Viper. It has carbonfibre bodywork and an aluminium chassis, with power coming from a mid-mounted 7-litre V8 and supplied to the rear wheels. We’re told that it has 620bhp and a kerbweight of just 1264kg – which should result in serious acceleration.

The company says it’s only sold one car so far – the one that was on the showstand – but reckons that there’s a market in America for a ‘home built sportscar in the $200k to $300k bracket.’