evo has learned that Volkswagen is still working on the Bluesport roadster project, despite reports it had been cancelled 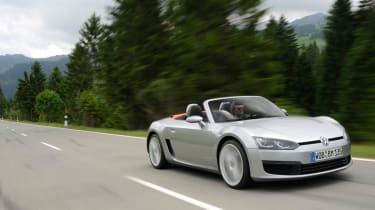 At the Detroit show in January much of the talk on the Volkswagen stand qas that the production version of the pretty Bluesport concept was close to death after not gaining enough support from US dealers.

The following week Porsche boss Matthias Mueller told a German mag that it would require a ‘new generation’ of customers before the company would consider production a sub-Boxster roadster. As the original plan had been for Porsche, Audi and potentially even Seat to use the Bluesport’s core architecture to produce their own models, this led many to pretty much write the Bluesport’s obituary.

But when evo caught up with Volkswagen’s engineering boss, Uli Hackenberg recently, we got a very different story – and exclusive confirmation that the Bluesport project is still very much alive.

During a visit to the UK, Hackenberg admitted to having been frustrated by the low sales forecasts: ‘dealers are always looking backwards, not forwards… this is particularly the case when a new model is being considered as they don’t have any reference point to guide them, so they look around at the current market and give an estimate based on that.’

Hackenburg believes that the sportscar market is going to change radically, and that the current lack of entry-level models has artificially stifled demand. But an influx of new models, including the Toyota GT 86 and Subaru BRZ, plus the next-gen Mazda MX-5, is set to revitalise the junior sportscar market.

Hackenburg also predicted that the strength of the US dollar will make European cars more competitive in America, further stoking demand. Volkswagen is now asking its dealers to reappraise their sales estimates, with Hackenberg confident that forecasts will break the 50,000 mark necessary to get the project green-lit. And if a production version does get the go-ahead it will be on sale within three years and wearing a pricetag of between £25,000 and £30,000 at current prices.

That, it turn, would give Porsche a new dilemma – whether to go ahead with its own version, or to leave the market to Volkswagen and Audi.

Read the full story in the latest issue of evo magazine, on sale now.
Follow us on TwitterFollow us on FacebookEmail us