The sports cars, racers and race memorabilia to look out for at the 2012 Race Retro Classic Car Auction 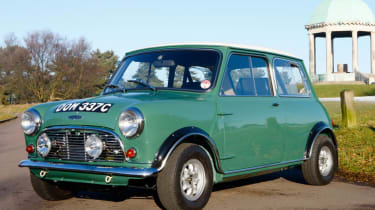 The 2012 Race Retro Classic Car Auction takes place at Stoneleigh Park, Coventry, on February 25. Held by Silverstone Auctions, there’s a plethora of road and racing cars for sale. Perhaps the quirkiest lot is a 1965 ‘Twini’, a Mini Cooper S with two 1275cc engines, one up front and one in the boot, making it an eight-cylinder, four-wheel drive hatch. It’s a replica of the pair of prototype Twinis created in the early sixties, and estimated at £20,000 to £25,000, it would make a wonderfully leftfield track toy. Another highlight is the one-off MG TF500 X-power from 2001, a wildly styled MG TF caricature designed to show off the marque’s engineering prowess. With a 400bhp Cosworth turbo engine in the middle (with anti-lag!), an X-Trac six-speed sequential gearbox and a limited-slip differential, it’s MG’s most exciting roadster ever, and is even road legal. Its estimate is £25,000 to £30,000. There’s a good selection of competition cars, with a successfully campaigned Metro 6R4 Group B rally car (estimate: £47,000 to £52,000) and a Group N Prodrive Subaru Impreza (£43,000 to £48,000) among them. Smaller sums of cash can buy cool cars at Race Retro, too; one of only 197 Lotus Esprit GT3s – a turbocharged, lightweight special – is estimated at £13,500 to £16,000. There’s a Porsche 968 with comprehensive history and a recent engine rebuild guided at just £5000 to £8000, as well as a smart, low-mileage 924 Turbo with no reserve. Perhaps the auction’s biggest potential bargain, if you don’t mind left-hand drive, is a smart BMW 635 CSi with a £3200 to £4000 estimate. It’s also a chance to get hold of some fantastic racing merchandise, top billing going to a crash helmet used and signed by the late Ayrton Senna. It’s a full face Shoei lid from his World Championship Winning time with McLaren, and it’s expected to fetch £42,000 to £50,000, more than most of the auction’s cars.