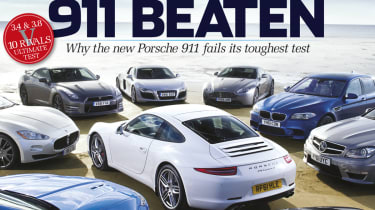 Buy a copy of evo 168 in our online shop

LettersMourning the end of manual gearboxes; and does washing your car make it faster?

New Porsche 911: the definitive testIn one of 2012’s most crucial tests, not one but two new 911s head to our favourite Welsh roads to meet a welcoming party that’s anything but. The 3.4-litre 911 Carrera tackles M3, XKR, Evora S, C63 AMG and GT-R in south Wales. We then drive the winner to Snowdonia where it joins Vantage S, R8, M5, XKR-S and GranTurismo S to battle the 3.8-engined 911 Carrera S. By the end we’ll know who makes the world’s best sports car

Audi A1 QuattroAn A1 supermini that costs forty grand? Has Audi gone crackers? We drive the all-wheel-drive, 253bhp quattro to find out

Seven in the snowYou can put winter tyres on just about anything now, Caterhams included. Henry Catchpole deliberately heads for some snowy European mountains…

Bentley GTC in Spain…while Harry Metcalfe inadvertently does the same while trying a Spanish coast-to-coast in Bentley’s new V8 Conti cabrio3000km in a new 3-seriesDrive a 320d across Europe, with some tough challenges to complete on the way? Sounds like a job for the office new boy

Long-term testsThe boss sells his Clio V6 and our Polo GTI’s gone back; was its DSG gearbox a help or a hindrance?

evo KnowledgeThe mk1 Audi TT is far from a tart’s handbag. It can make a cheap and capable track toy. Buying guide here

Buy a copy of evo 168 in our online shop