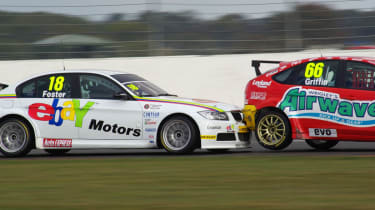 evo is set to continue its close connection with the British Touring Car Championship, having been announced as one of the sport’s official media partners for 2012.

That means you’ll still see evo’s familiar logo carried on all of the competing cars, along with that of our sister mag, Auto Express. You’ll be able to read plenty of BTCC insight and updates in both evo magazine, but also here on evo.co.uk – with reports on every race.

‘It’s only right that Dennis’s magazines and websites, which represent the very best in automotive news and reviews, are associated with the biggest and best motor sport attraction in the UK, the BTCC,” said Geoff Love, evo’s Publishing Director, “both the Dennis group and the BTCC benefit enormously from this great association, plus the access that the BTCC grants our journalists and readers is unrivalled – it’s a must-see event for anyone with even the slightest interest in motoring and we’re delighted to be extending this partnership into 2012.’

BTCC Series Director Alan Gow added:  ‘Both the top-selling Auto Express and evo brands have become part of the BTCC fabric over the past decade and their long-running support is an integral part of the championship’s on-going and increasing success.’

The 2012 British Touring Car Championship starts on April 1st, with the first race at Brands Hatch.