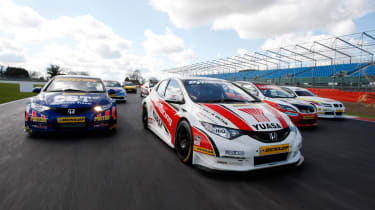 The 2012 British Touring Car season starts in less than a fortnight, and the championship’s grid is in rude health. 24 cars will line up at Brands Hatch on April 1 (with a 25-car grid expected the rest of the season), and every one of them will be turbocharged. That’s because new NGTC (New Generation Touring Car) regulations are almost in place now; every car in the championship uses a standardised 2.0-litre turbo four-cylinder engine, while 50 per cent use an NGTC chassis setup that will be standard across all competitors from 2013. Early favourites for the 2012 trophy will be Honda, with 2011 drivers’ champion Matt Neal and title runner-up Gordon Shedden still on the books and driving the new-shape Civic, which gets the full NGTC chassis and engine treatment. Neal’s long-time foe Jason Plato is likely to push hard, too; he leads the lineup at MG, which returns to the sport as a manufacturer with its MG6 hatchback. Plato has two championship trophies to Neal’s three, so has some catching up to do. His teammate is Andy Neate. Other drivers worth a cheeky flutter are Tom Onslow-Cole, in an eBay Motors BMW 320si, Mat Jackson in his Redstone Racing Ford Focus ST and Andrew Jordan, driving a full NGTC-spec Civic the same as those being campaigned by Honda itself. After five years in BTCC, he's very serious about his title chances this year. Turbo boost pressures will be adjusted to keep the pack close all year, with a system borrowed from the World Touring Car Championship to make sure competition isn’t compromised. Dunlop remains the headline championship partner and supplier of the thousands of tyres needed throughout the season, while live race coverage will be provided by ITV4 – with HD available – and itv.com. And after every race weekend there’ll be reports and picture galleries here on evo.co.uk…

Click here to win tickets to the first round of the season!