38 years after the Scottish track was opened, a new reverse layout signals the start of a re-birth for the circuit 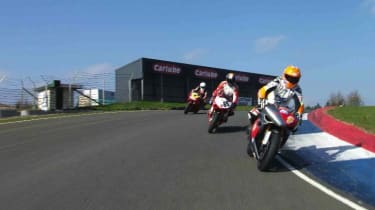 Britain's northernmost race circuit - Knockhill in Fife, Scotland - has undergone a radical transformation with the unveiling of a new layout and a reversed track direction.

Host to the BTCC and various other UK race series, as well as being a popular location for trackdays for Scottish drivers, Knockhill has been given its biggest makeoever since the track opened in 1974, with substantial works as well as the change from clockwise to anti-clockwise running. If nothing else, it should make the tight hairpin at Taylors - which is now downhill - more of a challenge for the track regulars.

As well as cars, the circuit is also a popular venue for bikers, as it forms part of the British Superbike Championship calendar. Track owner and motorcycle racer Derek Butcher commented on the new layout, saying: 'I raced at the very first Knockhill bike meeting back in 1974 and couldn't resist getting back on track today to try out the reverse direction. It was an absolutely amazing experience. It's going to be a real challenge for all competitors and I think every driver and bike rider will enjoy the new direction just as much as I did.'