Chrysler has revealed the all-new SRT Viper at the 2012 New York motor show, with 640bhp and a power to weight ratio to rival the most exotic supercars 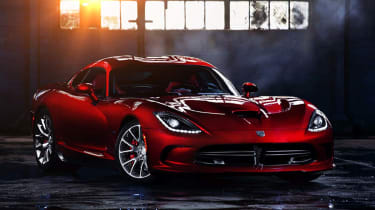 In proof that the American muscle car is in rude health, Chrysler has revealed a new version of its iconic Viper sportscar at the New York motor show.

Headline figures are 640bhp and 600lb ft of torque, a body that’s claimed to be 50 percent stiffer and lightweight carbonfibre and aluminium construction that – Chrysler claims – means the new Viper will have  the third-highest power-to-weight ratio of any production car, with only the Bugatti Veyron and Ferrari F12 keeping it off the top spot. It’s also set to receive a change of name, becoming officially the SRT Viper.

Despite giving us an almost complete technical breakdown of the car and its components – we can tell you that sixth gear has a ratio of 0.63 and that the car boasts 127mm of ground clearance – Chrysler was staying coy about performance numbers. Rest assured, they’ll be spectacular – with a new launch control system claimed to offer a ‘repeatable’ roadtest quality 0-60mph time for those prepared to pay for the clutch wear. We guestimate an official 0-60mph time of around 3.5 seconds and a top speed over the 200mph mark.

Power comes from a reworked version of the previous Viper’s 8.4-litre V10 engine, with power transferred to the rear wheels via a six-speed Tremac gearbox. We’re told the motor has the highest torque output of any naturally aspirated engine. The chassis is aluminium and most bodywork is made from carbonfibre.

Chrysler is also happy to acknowledge the limitations of previous Vipers, especially when it came to their kitcar quality interiors, with the new car getting a properly trimmed cabin and plenty of standard-fit kit. Two versions will be offered, the stripped down standard car and a more comfortable ‘GTS’ version. We’re also promised that this car will help to rectify the power: handling imbalance of previous versions.

There’s no word on pricing – and whether any version will (officially) come to the UK. However Chrysler did confirm that it will be entering a racing version in the American Le Mans Series – a welcome reminder of the days when Vipers starred in endurance racing.