Dunlop Motorsport has celebrated the impressive milestone with a ten-truck drive-by stunt. 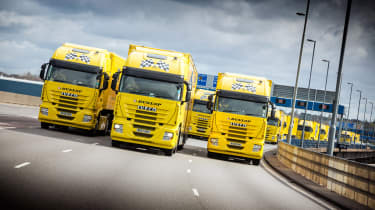 Although the sight of ten HGVs taking over three lanes of the M6 might be slightly unsettling, this one-off stunt was orchestrated in order to celebrate the 40th anniversary of Spaghetti Junction, the UK's largest and most complicated intersection.

Dunlop's racing tyres are manufactured at the Fort Dunlop facility in Birmingham, and the company estimates that it has shipped more than 10-million tyres across the Gravelly Hill Interchange (as it's officially known) since it was first opened in 1972.

The ten-truck convoy converged simultaneously on many of the different intertwined roads of the junction for an aerial photograph. The trucks then paraded through the city on the old Birmingham Superprix circuit, which made some of city streets famous for motor racing.