More than 40 classic touring cars, from the from '70s through to the '90s will be racing at Silverstone Classic. 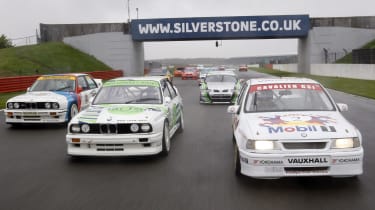 One of the main attractions at this year's Silverstone Classic event, is the double-header Fujifilm Classic Touring Car Trophy, which is a full 41 car grid of classic touring cars.

16 of the cars are of the 'super touring' era from the early '90s, which saw many manufacturer-backed teams take to touring cars, in what many deem to be the golden era of the sport. Others will be excited by the inclusion of the Ford Sierra Cosworth RS500 and BMW M3, which both battled for supremacy in DTM during the 1980s.

Also in the running for some great racing will be the European touring car Jaguars XJ12C and XJS that were successfully run by TWR. Obviously, not all the cars will be running at the same pace, but expect to see some of the older DTM and European touring cars pushing the newer machinery down Hanger straight!

So far the line-up consists of: