Started in 2010 to raise money for troops injured in Afghanistan, the Rally For Heroes is about to run for the second time – touring some of the best roads in Europe. 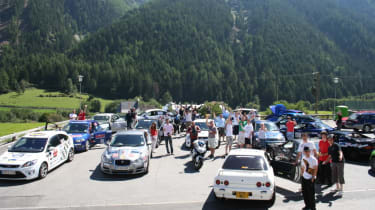 A driving event to raise money for injured service personnel is about to run for the second time – touring some of the best roads in Europe. Rally for Heroes is starting from Dunsfold on 18 August, with a convoy of 50 cars setting off for some of the best driving roads in Europe. The seven-day event will raise money for both Help for Heroes and the Royal British Legion.

The idea behind Rally for Heroes is to drive five miles for every member of the British armed forces killed or injured in Afghanistan.

‘The first event managed to raise £32,000, and this time we’re aiming for £100,000,’ said the event’s founder, Corporal Mick Clark of the 1st Batallion, The Princess of Wales’s Royal Regiment, ‘the event has grown in pretty much every dimension. From the route – more than 1000 miles longer – to the number of cars, and the support from big sponsors and private donations.’

Formula One commentating legend Murray Walker will be dropping the start flag on 18th August at Dunsfold Aerodrome, with 50 cars facing the 2110 mile route. Entrants will head south through France, pass Le Mans, cross the Millau Viaduct and then go onto Monaco and Nice.

The next stop will be Milan, along the coast of Lake Como, heading north into Switzerland over some of the great mountain passes. The Route then carries on further north through the Alps, and across Austria, into Germany - visiting both Hockenheim and Nurburgring. Most participants will be heading back to the UK, converging on the Wings and Wheels event at Dunsfold.

Corporal Clark was serving in Afghanistan when he and co-founder Warrant Officer Benn Laidler came up with the idea of raising money for charity. ‘We were stationed in Bastion, and could see the sheer number of medivacs coming in and out of the camp, the scale of which just wasn’t being reported. We were planning a tour of the great roads, and the rest just fell into place, with just four days to plan the whole event,’ he told evo.