2012 saw UK car sales rise past 2million. There were big rises for Porsche and Bentley, but bad news for Lotus and Renault 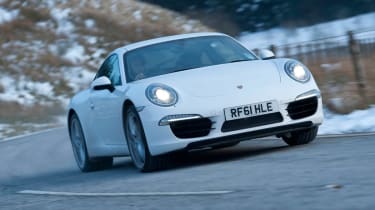 Car sales grew by over five per cent in the UK in 2012, with 2.045million registrations compared to 2011’s 1.941million. It’s the largest sales volume since 2008, and is promising news for a car industry that has been wounded by the poor economic climate of recent years. There were mixed fortunes for some of our favourite carmakers, however. Big winners were Porsche – with sales rising an impressive 25 per cent to 7998 cars, the new 911 and Boxster launching in 2012 – and Bentley, the new V8-engined Continental GT no doubt helping registrations rise 22 per cent to 1267 units. There was similar success for other UK manufacturers, Jaguar seeing a slight rise of 2.3 per cent, Land Rover a more substantial 29 per cent (thank the Evoque for much of that) and MG a whopping 117 per cent, though sales of the MG6 hatchback and saloon rose from 360 to a still thin 782 cars. A sad contrast can be found at Lotus, with sales plummeting by over 58 per cent, 137 cars sold in the whole of 2012. It’s another clear sign of a sports car manufacturer in trouble. Other losers were Subaru (sales down 23 per cent to 2023), Alfa Romeo (down 37 per cent to 7253) and Renault (down 40 per cent to 40,760). The UK’s best selling car was, once again, the Ford Fiesta, accounting for over five per cent of all registrations with 109,265 sales. The full list is below. 2012’s best selling cars 1 Ford Fiesta2 Vauxhall Corsa3 Ford Focus4 Vauxhall Astra5 Volkswagen Golf6 Nissan Qashqai7 BMW 3-series8 Volkswagen Polo9 Mercedes C-class10 BMW 1-series