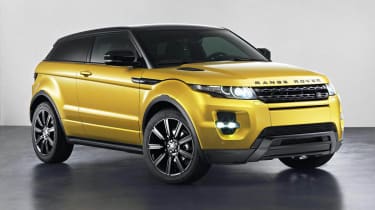 Land Rover has unveiled a special edition Range Rover Evoque. Titled the Sicilian Yellow Limited Edition, for surely obvious reasons, it’s the brightest hued Range Rover since the Daniel Craig film Layer Cake. It’s available as a three- or five-door, and as either a yellow body with black roof and mirrors, or black body with yellow roof and mirrors. There’s also a host of yellow detailing inside.  The black exterior details debuted by the Sicilian Yellow also make up a Black Design Pack that is available on other Evoques from April 2013. Comprising a rear spoiler, darkened headlights, 20in gloss black forged alloys and black bumper sections, it’s available on Dynamic models, meaning it can only be specified on the highest powered diesel – the 188bhp 2.2-litre SD4 – and the 237bhp 2-litre SI4 petrol engine. Over 100,000 Range Rover Evoques were sold in 2012, making it Land Rover’s most sought-after model. It also contributed to the brand’s 29 per cent increase in UK registrations, far outstripping the more subtle increase in sales across the rest of the car market.