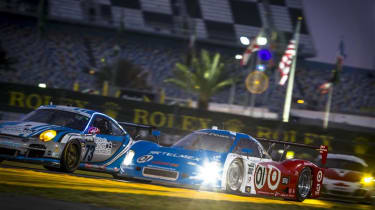 Remember the Formula 1 star that turned his back on McLaren mid-season to go NASCAR racing? Well, on Sunday in Florida, Juan Pablo Montoya proved he can still cut it in regular road racing by inspiring his Chip Ganassi Racing team to victory in the Daytona 24 Hours.

The Colombian, racing for his regular NASCAR outfit (with whom he also pipped evo columnist Dario Franchitti to the ChampCar title in 1999), put in a stunning drive to grab the victory in the final hour of the round-the-clock race for GrandAm sportscars. Sitting fourth after the restart, he charged his way to the front quickly and stormed away from the opposition to win by almost 22 seconds, collecting the trophy with his team-mates, Americans Scott Pruett and Charlie Kimball, and Mexican Memo Rojas.

Meanwhile, recently retired MotoGP star Casey Stoner has confirmed that he is switching to four-wheeled racing in his native Australia this season. The two-time world champion will drive a Red Bull-sponsored Holden Commodore in the Dunlop V8 Supercars Development Series, the junior version of the main V8 Supercars tour. He’ll make his race debut on March 1 at the Clipsal 500 meeting, held on a shortened version of the ex-F1 street circuit in Adelaide. The 28-year-old also hasn’t ruled out moving up to the top-flight series for its biggest race, the Bathurst 1000 in October.