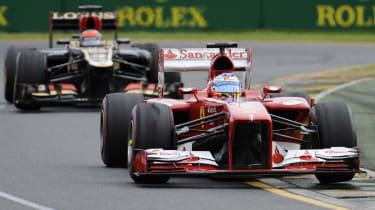 Kimi Raikkonen outfoxed both Fernando Alonso and Sebastian Vettel with a two-stop pit strategy to win the opening Formula 1 race of the season, the Australian Grand Prix. The Lotus driver started seventh, but moved up to fifth at the start, then conserving his tyres to allow him to make one less stop than Alonso and Vettel, who finished second and third. Lewis Hamilton took fifth on his debut for Mercedes behind Felipe Massa, with Paul di Resta eighth for Force India, Jenson Button ninth on a difficult weekend for McLaren, and Max Chilton 17th for Marussia in his first Grand Prix. In sportscars, Audi dominated the traditional season-opener, the Sebring 12 Hours in Florida. A win for the German marque was expected with main Le Mans rivals Toyota not present, but its two cars were still allowed to fight tooth-and-nail throughout the race with no team orders applied. The number one R18 E-tron hybrid of Marcel Fassler, Benoît Treluyer and Britain’s Oliver Jarvis beat its sister machine driven by Allan McNish, Tom Kristensen and Lucas di Grassi by just 7.6sec after 1361 miles of racing. Six-time Grand Prix winner Ralf Schumacher has retired from competitive driving, reversing a decision to continue in the DTM touring car series this season. The 37-year-old German, who has raced for Mercedes in the DTM since leaving F1 at the end of 2007, intends to take up a managerial role for the Mucke Motorsport team. He managed just two podium finishes in his 52 DTM appearances. The new IndyCar season gets underway on the streets of St Petersburg in Florida this weekend, with four-time champion and evo columnist Dario Franchitti aiming to regain his title for Chip Ganassi Racing after a lacklustre 2012. His third Indy 500 success was his only win of last season as he struggled to seventh in the points while American Ryan-Hunter Reay took the title for Andretti Autosport. Franchitti’s Ganassi team-mate Scott Dixon and Team Penske trio Helio Castroneves, Will Power and AJ Allmendinger are also expected to fight at the front.