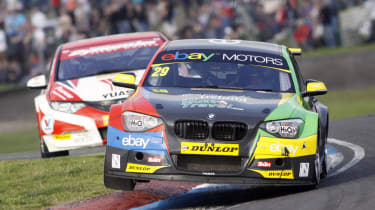 Colin Turkington forced himself right back into the British Touring Car Championship title race with two wins at Knockhill at the weekend as Matt Neal narrowly clung on to his points lead.

BMW 125i M Sport driver Turkington claimed the early lead in race one at the Scottish circuit, deposing the Audi A4 of polesitter Rob Austin on lap two and then cruising away to a comfortable victory. Armed with pole position for race two, Turkington then stormed away from the rest of the pack to rack up his fifth win of the season. Tipped by many to complete a hat-trick in the reverse-grid race three, the Ulsterman finished fourth, only to be excluded for a turbo overboost infringement.

It was the Pirtek Racing Honda Civic of Andrew Jordan that won that third race, closing to within six points of championship leader Neal in the process. Neal finished second to Jordan in that race, having already notched up seventh and fifth in the first two outings, continuing his consistentcy of racking up high points finishes. As for MG team leader Jason Plato, his aspirations towards a third title took a knock as he failed to pick up any podiums, finishing fourth, seventh and fifth. He’s now fifth in the standings, 54 points behind Neal with just nine races to go.

The next three rounds take place at Rockingham Motor Speedway in Corby on September 14/15.