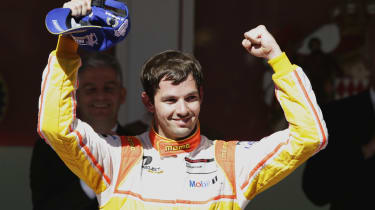 British sportscar ace Sean Edwards has died at the age of 26 from injuries sustained in a testing crash at Queensland Raceway in Australia. The son of 1970s F1 driver Guy Edwards was the passenger in a Porsche 996 GT3 which left the track and hit a tyre wall. Edwards was killed instantly by the impact, while the 20-year-old driver was airlifted to hospital with life-threatening injuries after being cut out of the wreckage, an operation that took three hours and required a fire to be extinguished. Over the last few years, Monaco resident Edwards had established himself as a real rising star in GT racing, starting in 2006 when he won the inaugural European GT3 Championship at the age of just 19. A career racing GT cars all over the world followed, while Sean also features in the recently-released film Rush, driving the Penthouse Rizla Hesketh raced in Formula 1 by his father in 1976. This year had been a hugely successful one for Edwards, as he claimed his first major endurance race success at the Nurburgring 24 Hours in May in a Mercedes SLS AMG GT3. The victory was the first-ever at the event for a Mercedes and made Edwards only the third British driver to claim outright success there, following Steve Soper (1987) and Andy Priaulx (2005). He also successfully defended his Dubai 24 Hours title in January, again driving an SLS. On top of this, Edwards had starred in the F1-supporting Porsche Supercup series this season, winning at Barcelona, Monaco and the Hungaroring. Edwards could still win the title posthumously - he currently holds an 18-point lead over nearest rival (and winning Nurburgring team-mate) Nicki Thiim, with a maximum of 40 up for grabs in the final double-header in Abu Dhabi next month.   evo offers its sincere condolences to Edwards’ family and friends.