The Zenos E10 is a new British sports car to fight the Caterham Seven and Ariel Atom head on. Full story here 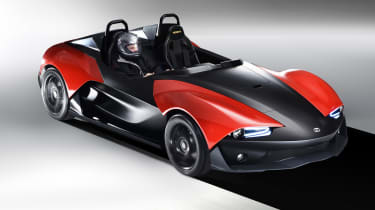 It’s nearly six months since the Zenos E10 took its bow at the Autosport exhibition. Progress has continued apace since, the company setting up new facilities in Norfolk, hiring more full time design engineers and giving the E10 show car a shakedown at Millbrook Proving Ground.

Two evaluation prototypes will be built imminently, with production-spec cars and validation prototypes due in autumn. Deliveries of the E10 are expected to start in early 2015.

Priced from just £24,995, the E10 enters the specialist British sports car market at its affordable end. Powered by a 2-litre four-cylinder Ford engine, it produces 200bhp and 155lb ft – figures far greater than an equivalently priced Caterham Seven. With a 650kg kerb weight, it boasts a 313bhp/ton power-to-weight ratio, matching a Nissan GT-R. It’s enough for an estimated 4.5sec 0-60 time and a 135mph top speed.

A five-speed manual gearbox comes as standard, while a six-speed stick-shift sits beside a limited-slip differential on the options list. A £28,995 Launch Edition ticks both boxes, while also adding a special paint scheme, a quick-release steering wheel and a footwell heater. It will be limited to 75 units, most of which have apparently sold.

The E10 wades into a competitive low-volume sports car market with a couple of innovations. One is its central beam structure, which puts torsional rigidity through the spine of the car. This should enable much lower sills (and therefore easier ingress and egress) when the E11 roadster and E12 coupe, which will be equipped with doors, windows and roofs, launch further down the line.

Another selling point – which Zenos co-founder and director Ansar Ali describes as the company’s ‘raison d’etre’ – is a focus on keeping running costs low, particularly those associated with accident repair or bodywork damage. It’s exemplified by relatively cheap to replace materials at the car’s corners.

‘They’re sacrificial panels’, Ali says. ‘Customers quickly lose faith with the product if every time they prang something the repair bill is a few thousand pounds. We want to develop a brand and product that is affordable to play with: that to us is really important.’

Similar thinking inspired the use of inboard pushrod suspension. ‘Not because we want to replicate being an F1 car’, reveals Ali, ‘but because they are out of harm’s way, so if you do damage a front corner, you hope you won’t be replacing a damper’.

The E10 also brings a carbon cockpit to a relatively affordable price point, with the use of recycled carbon making it possible. ‘We did not go out to use carbon in the car’, Ali reveals, ‘but for weight and low cost, this delivered’.

The next public appearance for the Zenos E10 will be at the 2014 Goodwood Festival of Speed, where a bright green example will be on static display. We look forward to driving it later in the summer.