Sebastien Ogier takes the first win of the season on the one and only Monte Carlo rally. Full report here 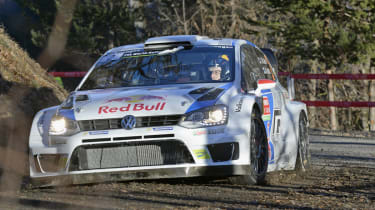 The opening rally of the 2014 World Rally Championship was a fantastic way to kick off the 2014 campaign, with a wealth of drama and surprises available on each day. Reigning champion and firm favourite, Sebastien Ogier turned around a poor start to outclass the field and retake his position at the top of the standings after his triumphant 2013. But with WRC rookie and F1 star, Robert Kubica making headlines and a Brit finally standing on the podium, this weekend’s rally was far from predictable. Here’s our round up of the three days of rallying in Monte Carlo.

After a fantastic debut in his M-Sport prepared Fiesta RS WRC, F1 race winner Kubica stunned both competitors and spectators with his winning performances in the first two stages of day one. His slightly more cautious approach to the rest of the day saw him slip down the order as Bryan Bouffier’s gamble to run two snow tyres on his Fiesta RS WRC, enabled him to slide his way to the top of the leaderboard after SS3.

But it was reigning World Champion and VW Polo R WRC driver, Ogier who managed to clinch the final two rounds of the day, with his decision to run on winter tyres paying off in the increasingly slippery conditions. Morning star, Kubica struggled in the evening’s muddy conditions, pushing him down to third after day one. Stage three winner Bouffier’s strong afternoon enabled him to hold onto a 38.8 second lead to head the leaderboard as the day came to a close.

Ogier didn’t hesitate to reaffirm his intentions to charge up the leaderboard as he once again set the fastest time on the morning of day two. Kubica and British Citreon DS3 WRC driver, Kris Meeke battled for the final podium spot, with Meeke edging out enough of an advantage to steal third after stage seven.

Still at the top of the time sheets, Bouffier managed to take the win for the second stage albeit by only 0.2 seconds to Ogier, but it at least halted the World Champion’s momentum for the time being. That time was incredibly short lived however, as Ogier’s successful attack on Bouffier finally saw him leapfrog the Frenchman to the top of the standings, whilst early leader Kubica’s rally came to an abrupt end as he skidded off a bridge on one of the many surprise low grip areas of an asphalt dominated stage nine.

Ogier continued his fine form into the afternoon, finishing as fastest and second fastest to conclude the day sitting comfortably at the head of the standings by 51.1 seconds to Bouffier. It was Finnish Polo R WRC driver, Jari-Matti Latvala that claimed the top spot for the final stage in the dark of the evening however, with Bouffier’s hopes of re-catching Ogier having taken a hit as he struggled with missing pace-notes.

On the third and final day of the Monte Carlo rally the weather showed no signs of improving as the drivers were greeted to stage 12’s roads, strewn with standing water. The conditions showed no signs of stopping Ogier however, as he powered his way to a late lead in the morning stage, teammate Latvala having held the lead of the stage up until the final split.

Stage 13’s ice ridden tarmac still couldn’t prevent Ogier from charging to the top of the time sheets once again, the champion admitting he had also made sure to add to his pace-notes in preparation for the evening’s power stage on the same route.

First driver out, privateer Jaroslav Melicharek fell victim to stage 14’s harsh weather conditions, with the Slovakian getting stuck up the Turini pass. This created an unwelcome traffic jam for following drivers, and with conditions showing no signs of improving the organisers decided to cancel the stage.

Stage 15, the power stage, was therefore the next and final event to count. With Ogier deciding to not take unnecessary risks, Latvala was able to grab the stage win, albeit by just 0.4 seconds. Meeke finished the stage third fastest, securing his place on the final step of the podium, the first time a Brit had done so in over 10 years. Bouffier’s fourth place enabled him to hang onto second in the overall standings, with Ogier taking the win by a comfortable one minute 18.9  seconds.

The Monte Carlo rally could have been so different, with Kubica’s early pace and Bouffier’s strong showing in day one fading to World Champion, Ogier. But the Frenchman showed why the number one sits firmly on his Polo R WRC, consistently outclassing the field to take a well deserved win at round one of the 2014 WRC.

No doubt the drivers will be confronted with more ice and snow when they’re next behind the wheel, as round two of the WRC is held in Sweden between the 5th and 8th of February.