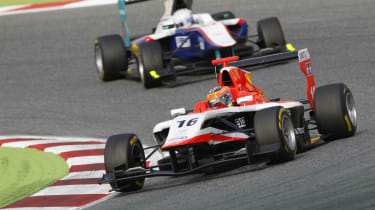 Fighting off pressure from initial pole-sitter Matheo Tuscher, Stoneman managed to power his way to his first victory in the junior single-seater series just one year after recovering from testicular cancer.

Not allowing a rain-soaked circuit to dampen his spirits, the 23-year old was joined by the entire GP3 field on slick tyres as the cars headed to the grid. Emphasising just how slippery conditions were, the South Londoner span whilst warming his tyres on the formation lap but luckily managed to keep the car running.

He remained composed however as he set his charge to take the lead from the off, passing Tuscher with an impressive late-brake manoeuvre on lap two. Tuscher responded with an attack into turn five, but the Swiss rookie was unable to steal the lead back with resulting contact forcing him behind.

From there on Stoneman showed his worth by controlling the race and pulling out a comfortable lead as the track began to dry. A safety car did bring Tuscher and chasing driver Dino Zamparelli back into contention, but a small mistake from Tuscher into the chicane on the penultimate lap ensured that the young Brit was able to take the victory with a 0.9sec gap.

Added to the points from his seventh place finish in race one, Stoneman – who evo has picked as a future F1 star - now sits fourth in the GP3 standings, 10 points behind fellow Brit and Championship leader Alex Lynn.

The next round of the 2014 GP3 Championship takes place at Austria’s Red Bull Ring on 20-22 June.