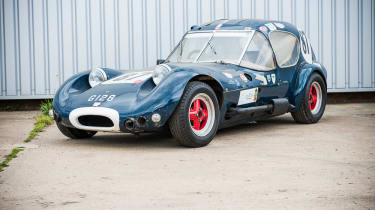 Sir Jackie Stewart’s first ever racecar will be up for auction at the Silverstone Classic on July 26 and 27. The 1960 Marcos GT Xylon is extremely rare and its value is estimated between £35,000 and £50,000.

Marcos was founded by Jem Marsh and Frank Costin, who only built nine Xylons of which this is the most famous. In 1960 Barry Filer, a Scottish racing enthusiast, invited a then young Jackie to test with him at Oulton Park. Subsequently, Filer bought ‘G128’ for the 1961 season, which Jackie proceeded to drive for him, winning four races. Then in 1962 Jackie became professional and began to race Jaguars. However, the car continued to be raced throughout the 1960s under the control of Jem Marsh.

The present-day owner acquired the 1960 Xylon after he bought the remnants of Marcos Sportcars in the 1990s. The Xylon has been hidden in storage since the marque’s Wilshire factory closed.

Jackie’s first race car will be offered in ‘barn condition’ therefore will be in need of restoration to bring it back to it’s racing glory days. But as Nick Whale, managing Director of Silverstone Auctions, commented ‘It’s fantastic to be offering this car for auction for the first time in its life. Jackie Stewart is one of the country’s most legendary racing drivers and therefore its apt that we are offering it at the home of British Motorsport.’