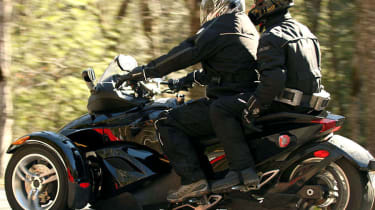 Sensational shots of a type of vehicle the world has never seen before! The threewheeler pictured here is a prototype developed by Bombardier Recreational Products in Canada. Bombardier is known for producing snowmobiles, small business planes and railway cars. The big Canadian company, with more than 6000 employees and a lot of money, does also own Rotax, which makes motorcycle engines for Aprilia and BMW.

This new Threewheeler is designed to offer a similar experience to riding a motorcycle, but with the added stability of three wheels. Another advantage is that in many countries a normal car driving licence will allow you to ride this, without the need for a motorcycle licence.

The engine is a 1000cc, 60-degree water-cooled V-twin, designed and built by Rotax, which is owned by Bombardier. It is the same engine as used in the Aprilia RSV-R superbike, so should make around 130 bhp.

According to the firm's original plans, the bike should have a CVT gearbox, but the spy pictures appear to show a conventional foot-operated gearchange. Bosch has developed an ABS brake system for the vehicle, and an electronic stability system. The front and rear brakes are operated individually, as on a motocycle.

The vehicle could be marketed under the Can-Am brand, which, again, is owned by Bombardier. The firm is planning to launch the vehicle on February 7 at an airfield in San Diego, and it will be sold in mainland Europe and the United States, with deliveries starting in the first half of 2007.