Here are the best pictures yet of the Opel Insignia fastback 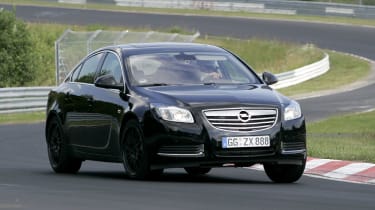 Besides the saloon, which had been launched some weeks ago, and the estate, which is expected to arrive in 2009, this is going to be the third variant of Opel’s new flagship. It’s said that both, the saloon and the fastback, will make their first public appearance at this summer’s British International Motor Show in London. GM Europe’s International Technical Development Center in Rüsselsheim, Germany, is responsible for the design of both variants.

Like the saloon, the Insignia fastback will be available with front-wheel-drive or all-wheel-drive. The AWD is fitted with the FlexRide mechatronic chassis system with its Adaptive Stability Technology, but is also optional for the FWD models. Seven engines will be offered at first, four petrol engines ranging from a 4-cylinder 115-bhp unit to a 260-bhp V6 and three new 2.0-litre direct-injection diesels ranging from 110 to 160 bhp. A less environmentally taxing EcoFLEX version will be on offer subsequently.