It might not be a hot hatch in the traditional sense, but the Nissan Juke Nismo shouldn't be dismissed so quickly 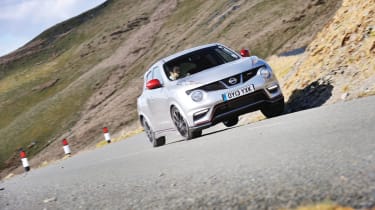 From the smallest to the tallest. Hop up into the Juke Nismo and it all starts rather well; the steering wheel feels great and has soft Alcantara in the right places (although you can’t adjust the reach), the seats are comfy and there’s a manual gearbox to play with. You also have a wonderfully commanding view out, with two little transparent frogeye domes protruding from the bonnet in front of you.

Just as the Mini shares an engine with the 208, so the Juke shares its four cylinders with the Clio, and it’s certainly quick enough down the road. However, where the Clio (which has a different inlet manifold, turbo and ECU) sounds purposeful and has myriad burbles, chuffs and parps to make you smile, the Nissan sounds terrible. It has no bass – despite an exhaust the size of the Channel Tunnel – just a nasal whine like a particularly boring washing machine.

Much more encouraging is the high vantage point you get of the road ahead. It gives you a feeling of unstoppability that makes you want to monster apexes and climb all over the verges like you’re in a rally car. Body roll is actually well contained too, but there’s no disguising the higher centre of gravity or the huge travel hidden in those cartoonish arches – the end result is a car that lacks any precision as soon as you try to hustle it. With its square-looking wheelbase you initially think that you might be able to get it set up nicely for corners if you turn in on the brakes, but the reality is that the rear just feels inert and unwilling to follow the front. If you’re aggressive with the throttle in a corner, traction also becomes a major issue as the lolloping suspension struggles to keep both front tyres in contact with the ground, although to its credit it never simply washes wide, so it’s not too terrifying on the narrower stuff…