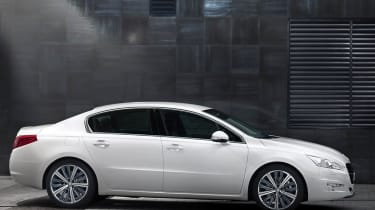 It’s that ‘what is premium?’ debate again. Not that anyone who really knows about cars genuinely believes that an Audi, say, is innately better than a Peugeot just because of the badge it wears. The new 508 proves the point perfectly.

There is a lot of quality in this car, visual and tactile. The cabin oozes sophistication; by comparison, those of obvious Mondeo and Insignia rivals are brash and slightly cheap. The switchgear is the equal of any premium German’s.

The 508 looks quite imposing from the outside. It suffers the usual bulbous-nose, long-overhang trouble of most modern front-drivers, but blame crash-test legislation for that. Place this car next to a BMW or Audi and I guarantee you will detect no difference in detail tailoring.

But is the 508 a driving machine? Will it lift your soul? Family-size Peugeots – 405s and 406s – used to do that, thanks to their mix of longitudinal suspension compliance, lateral precision and terrific damping, but around ten years ago Peugeot lost its dynamic direction. Souls were later searched, purpose was rediscovered. The RCZ and Citroën’s DS3 are manifestations of a return to form. Those are sporting cars, the 508 is not. But…

The top model is called GT. It uses a form of 407-derived, double-wishbone front suspension intended to give the most precise, rewarding drive of the new range. It does, too; it steers precisely, albeit with a touch too much artificial weight at speed, and its hydraulic assistance lets you feel the grain of the road when leaning hard on it in a tight bend. One input and you’re in, a light lift of the throttle and you’re in harder. It interacts properly, and it moves with the precise, proportional suppleness of its best predecessors. Probably no rival this side of a good 3-series matches it for that.

Lower-spec 508s use front struts, and are a touch vaguer. One uses a 154bhp petrol turbo engine to good effect, but the top GT comes only with a 2.2-litre turbodiesel and a six-speed paddleshift auto. It’s very torquey, very smooth and has 201bhp. Grand Tourer indeed.