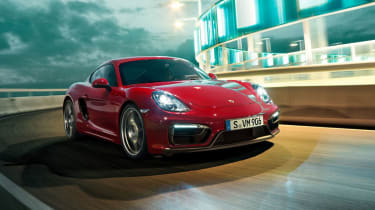 Porsche has revealed its fastest Boxster and Cayman sports cars yet. The mid-engined roadster and coupe pair now come in a new, range-topping GTS trim.

Both see a 15bhp rise over the S models they sit above, and while they both use essentially the same 3.4-litre flat-six engine, their power outputs differ: the Boxster GTS boasts 326bhp, the Cayman GTS a slightly healthier 336bhp.

Combined with a small rise in torque (the Boxster GTS has 273lb ft, the Cayman 280lb ft), performance has improved enough to make these the quickest of their breed yet, surpassing the superlative Boxster Spyder and Cayman R models of their previous generations.

As well as power and performance improvements, the GTS models also tick a selection of the Porsche options list’s most popular boxes, with PASM adjustable suspension, Sport Chrono (which combines a lap-timing clock, dynamic engine mounts and, if you spec the optional seven-speed PDK paddle-shift gearbox, launch control) and black 20in ‘Carrera S’ alloy wheels all standard. Other additions are a new front spoiler, tweaked taillights and a ‘Dynamic Lighting System’ for the headlights. The interior, like the 911 Carrera GTS that signed off the 997 generation, is treated to plenty of Alcantara. There's also a red rev-counter.

The GTS models command around £6500 more than the Boxster S and Cayman S they sit above; both are on sale now, and you’ll pay £52,879 for the Boxster GTS and £55,379 for the Cayman GTS. A six-speed manual gearbox is standard in each, with the PDK transmission optional.