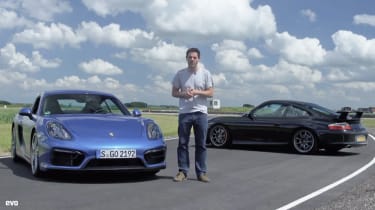 We’re often accused of Porsche bias here at evo. This video will probably do nothing to erode that, but regardless of your feelings on Stuttgart-made sports cars, this has the makings of a fascinating track battle.

In the blue corner is the new Porsche Cayman GTS. It’s the most powerful and stiffest sprung Cayman yet, and while it’s not vastly different to the regular Cayman S (its 335bhp and 280lb ft peak outputs represent respective climbs of 14bhp and 7lb ft), detail improvements to the suspension and a subtle new look combine to create a five-star car and possibly the best mid-engined Porsche ever (barring the wonderful Carrera GT hypercar, of course). Its 177mph top speed and 4.9sec 0-60 time combine with a new-found focus that elevates the Cayman GTS far beyond its conventional modern day rivals.

To find something that has a chance of ruffling the Cayman GTS’s feathers on track, we’ve had to delve into Porsche’s back catalogue. Eleven years ago, to be precise, and the second-generation version of the gloriously good 996 GT3. This was when the 911 GT3 line was still in its relative infancy, yet it was already established as our favourite 911 and as the current car shuns hydraulic steering and manual gearboxes, these older versions have crept up yet further in desirability.

This car, kindly lent to us by evo reader Jack Wood, has been mildly fettled for track use but its mechanicals remain largely intact. That means a 375bhp 3.6-litre flat-six engine, with a Cayman-matching 284lb ft of torque. At 1380kg, the 911 weighs a little more than its younger sibling, yet its performance ranks higher, with a 190mph top speed and 4.3sec 0-60 time.

With less mechanical grip than the epically well balanced Cayman, though, this looks like being our closest track battle yet. But just how close? The video above reveals all…