The Renault Captur is a Nissan Juke rivaling crossover, and a fast Renaultsport version could be due 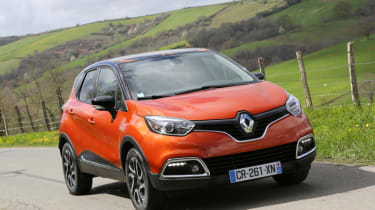 What is it? The Renault Captur, predicted to become the French firm’s second-best-selling car in the UK. Such is the predicted explosion of the so-called supermini crossover market segment, although there's nothing very mini about these not-quite-SUVs. Take a Clio, stretch it upwards and outwards, toughen it up with big wheels and plenty of scuff protection, and you have a Renault Captur ready to take on the urban jungle. Technical highlights? First, a lowlight; the Captur isn't available with four-wheel drive. Partly that's because the Clio 4 platform on which it is based doesn't lend itself to all-wheel drive. Partly it's because only three per cent of sales of the Renault-Nissan Alliance's slightly larger Juke are of 4x4 versions, suggesting there's barely a market for a compact SUV that actually drives like it looks. And partly it's because without the need to accommodate 4x4 hardware, the floor can be lower, the structure lighter, the production simpler, the boot and cabin roomier and the price more tempting. This is a small MPV dressed in an attitude suit. Three engines are offered – an 898cc, three-cylinder turbo with 89bhp, a 1.2-litre turbo four with 118bhp, and a 1.5-litre turbodiesel with 89bhp but a useful 162lb ft of torque. A six-speed, double-clutch transmission is standard with the 1.2, optional with the diesel. What's it like to drive? The Captur weighs around 100kg more than a same-engined Clio 4. So it's light for an almost-SUV, but it's also tall with its extra 100mm of ground clearance over a Clio. So the suspension needs to resist the inevitably greater body roll forces. Sometimes this is done with stiff anti-roll bars, but that can bring on a nasty head-tossing motion when one wheel hits a bump. Here, it's done mainly with stiffer springs and dampers. This gives a more natural cornering feel, but the Captur crashes violently over big bumps. Body control is otherwise quite good, and you can have some entertainment on a twisty road before physics overcome the built-in 'understeer control' – a simple form of torque vectoring. We tried two engines. The 1.2 with its double-clutch transmission is willing enough, but there are no shift paddles so all manual control is by the back-for-up, forward-for-down selector lever.  Our test turbodiesel had the great advantage of a slick five-speed manual shift to make the most of the engine's smooth, torquey delivery. It makes for a much more enjoyable Captur, a car you feel you're actually driving. Add in its remarkable 95g/km CO2 figure, and this is the obvious Captur to have. How does it compare? If you want four-wheel drive, rivals such as the Mini Countryman and the Vauxhall Mokka/Chevrolet Trax will provide what the Captur can't. Peugeot's new 2008 also goes down the Captur FWD-only route – but at the prices asked (£12,495 to £18,895), the Renault offers remarkable value at between £4k and £8k less than the extremes of the Countryman range. Anything else I need to know? This is complicated: trim levels are Expression, Expression+, Dynamique and Dynamique S, but you can also add one of three themed trim packages called Arizona, Manhattan and Miami. Trim, chromework, decals and some searingly bright interior flourishes are the deal here; choose with care. Oh, and Renault hasn't ruled out an RS version. We live in strange times.