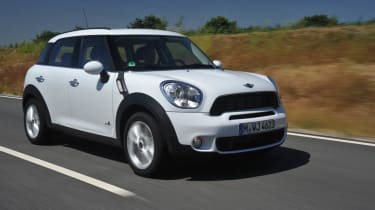 One of Mini’s big boasts during the Countryman’s grand unveiling was that it’s the company’s first car to measure over four metres long. So it’s not really that mini, is it?

Saying that, the soft-roading version of BMW’s baby is far more svelte and easy on the eye than pictures of it would have you believe. It’s not pretty, but in the metal its shape works – it looks compact, the stubby tail belying its Volkswagen Golf dimensions. It’s almost as practical as the VW too, with five useable seats and five proper doors.

Of more relevance to us, though, is how it drives. Mini hasn’t produced a bad car so far, from the skinny-wheeled fun of a basic One through to the mad-as-toast John Cooper Works, though the Countryman’s body poses the toughest challenge yet to the car’s keen- and-nimble reputation; never mind its extra height, this four-wheel-drive Cooper S ALL4 is a hefty 245kg chunkier than its front-drive hatchback equivalent.

You feel the bulk. Gone is the hyper response of its smaller siblings. In fact, in everyday driving this works to the Countryman’s advantage – a three-door Cooper S can feel overly frisky at times. On its fat-tyred 17in alloys, this car rode better than any Mini I’ve driven bar a saucer-wheeled first-gen Cooper, soaking up the worst of pothole-ridden urban roads, dirt tracks and bumpy country lanes. The optional 18 and 19in wheels might well reinstate some of the edge, of course.

Up the pace and you won’t be wincing before knobbly corners as you might in a big-alloyed three-door Cooper S, nor bracing yourself for the JCW’s wayward acceleration out of them. But then you’ll never get the rewards those cars offer, or the interaction their gritty nature provides. Instead, you’ll be dealing with increased weight transfer, a feeling exaggerated by the direct steering, while more acute corners occasionally take two bites at the wheel.

The engine is worthy of note. It’s a new level of tune for Mini’s turbocharged 1.6-litre petrol unit, now with 181bhp (up from 172bhp). The extra power is immediately consumed by the Countryman’s extra weight, but its new, smoother character can certainly be felt. It’s almost VAG-like in its silky and abundant torque delivery, and overtakes can be laughably easy. This engine replaces the old unit in all Cooper S Minis from now.

Four other engines will be available in the Countryman, with diesel sales expected to outweigh petrol for the first time in a Mini, by a ratio of around 60:40. Front-wheel-drive cars will also outsell 4wd (about 85:15). ‘ALL4’ is an option on the Cooper S and Cooper D models, and it’s a neat system: predominantly front-drive, it can send all of its power to the rear wheels during ‘especially sporty driving’. Over-exuberant ESP means you’ll really have to goad it into action, though.

All in all, the Mini Countryman is a good car to drive, so long as your expectations shift. It does possess the standard Mini’s handling DNA, but its less athletic body interprets it in a softer, more grown-up way. It may not be mini, but it very nearly drives like one.