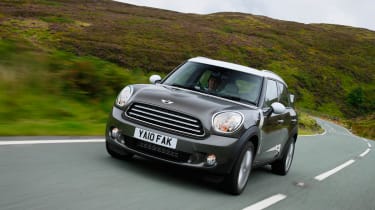 This is the 5-door Mini, which many Mini buyers have been waiting for apparently. Seems the main reason Mini owners leave the brand is the woeful lack of space (especially when kids are involved), something the clumsy Clubman model failed to answer. The resulting elephantine looks of the MINI Countryman take some getting used to.

BMW has developed a new diesel engine for the Mini, a 1.6-litre, 112bhp turbo diesel. The only Countryman available to us was the 4WD version (which BMW confusingly calls the ‘All4’ option) boasting a tardy 11.6sec 0-60mph, thanks to having a 1380kg kerbweight. Fortunately, the turbo kicks in early and provides plenty of torque (peaking at 199lb ft at 1750rpm) so it never feels as slow as this figure might suggest. Combined fuel consumption is 57.6mpg for the model tested here but this rises to 64.2mpg for the fwd version.

The main issues are the rather strange handling characteristics of the Mini Countryman. It’s an odd mix of the usual super sharp turn-in, but with much more roll. There’s more suspension travel on offer too and together with the higher centre of gravity (thanks to the taller body and ride height) it combines to remove much of the fun from the driving experience.

As for ride quality, this depends on how you spec the car. Go for the Chili pack on the All4 version and you get 17-inch wheels, which do compromise the ride without adding much to the driving experience. Run-flats are optional. Avoid them.

It is the run-away success of cars such as the Nissan Qashqai that Mini is chasing and there’s no doubt the Countryman makes a more stylish choice. But you will have to buy into the whole Mini ethos to put the Countryman top of its class, as it is so much more expensive than its rivals. A Mini Countryman Cooper D All4 lists at £19,875.

BMW isn’t expecting much uptake of the All4 version and I expect they’re right not to. The 4WD doesn’t add anything to the drive. BMW couldn’t tell me if the difference in power between the One D and Cooper D (22bhp and 44lb ft of torque) was simply down to a recalibration of the ECU but I suspect it is, as the CO2 figures for both are identical at 115g CO2/km.