Has Mini managed to package the things we love about the Cooper S in the high-rise Countryman? 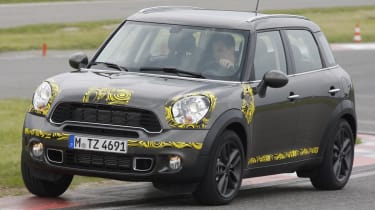 A Mini that’s no such thing, going purely on dimensions. The Countryman crossover is Mini’s bid to stop young owners chopping in their beloved hatchbacks and cabrios for Golfs when they get broody, from September Mini will be able to offer innovations like a decent boot, four proper doors, generous rear legroom and a commanding driving position. It’ll even head off road if you pay the £1,200-odd for the ALL4 four-wheel drive option on the Cooper S and Cooper D. Otherwise it’s front-wheel drive with prices starting at £16,000 for the 1.6 One.

The main tech difference over the current Mini is the option of ALL4, which sends a percentage of power to the rear wheels if slip is detected at the fronts. It’s a variation of BMW’s X-drive and keeps the central propshaft running at all times to quickly engage the rears. It weighs 65kg more than the two-wheel-drive, but divvying up the torque by four instead of two does reduce wheelspin.

Otherwise it’s Mini as usual, with three variants of the 1.6 petrol topping out at 181bhp for the turbocharged Cooper S, and two 1.6 diesels. A John Cooper Works pack will also be offered that, hilariously, lowers the suspension by the same 10mm the Countryman rides above the standard hatch. Thanks to Efficient Dynamics tweaks such as stop-start and an oil-pump that switches off when not needed, economy should be good, with even the S officially recording 44.8mpg.

Of all the Mini characteristics the engineers were desperate to carry over, the famed handling was top of the list. They’ve done it, up to a point. But it’s the right point, because no way would the hatch’s ultra-sensitive steering have worked here. It’s still direct, but there’s very little of that squirming you get under hard acceleration in the hatch. And the cornering isn’t as aggressively flat, but from what we could learn by riding the kerbs on the smooth test track we were confined to, the trade-off seems to be a decent ride. Obviously acceleration is blunted when the ALL4 Cooper S weighs 170kg more than the regular S. Even so, 7.4secs to 62mph is pretty swift.

The Countryman has the Nissan Qashqai just beaten on price, given an unusually high spec that includes air con, rear parking sensors, six-speaker stereo, dynamic stability control and Bluetooth phone link. It’s a tad smaller – despite boasting a boot that’s double the size of the Mini hatch – but bigger than Nissan’s forthcoming Juke (here October and expected to undercut the Mini). That’s the only size rival that’ll run the Countryman close on character, and the MINI hits back with details like the centre rail mount to affix options ranging from iPhone chargers to even dog bowls.

It’s the least British Mini since its forbear’s birth in 1959, with production shifted to Graz in Austria. Not that that’ll dampen sales, with the Americans expected to take the lion’s share and overtake the Brits as the number one Mini market because of it.