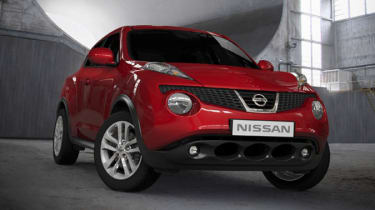 This rather odd looking thing is Nissan’s latest attack on car class conventions. It’s the Juke, a segment-straddling crossover that’s set to grab plenty of attention at the 2010 Geneva motor show next month.

And while most debate will stem from those bold looks, it’s Nissan’s claim of drivers’ car credentials that has us hooked. Much of the Japanese brand’s talk is of the Juke (formerly Qazana concept) offering an ‘active, dynamic driving experience’ alongside boasts of ‘real sports car DNA’ underneath the tall mini-SUV proportions.

There’s some interesting tech to back up Nissan’s suggestions, the Juke seeing the debut of two company developments. First up is a new direct injection (DIG) 1.6-litre petrol turbo, with hot hatch-like 187bhp and 177lb ft power and torque figures. It’s Nissan’s own (with some Renault input) and signals a new dawn for the petrol engine for both companies. A 1.2-litre supercharged DIG unit is set to appear in smaller models (read new Micra and Clio, we’d think) while different tunes of this 1.6 are possible, too.

Mated to the new engine in top spec Jukes is Nissan’s new torque-vectoring four-wheel-drive system. It’s front-wheel drive only during normal conditions, but when pushed can spread up to half that 177lb ft to the rear, sending mixed ratios between the two back wheels (50 per cent of the car’s grunt can go to one back wheel, for instance) to sharpen lines and help eradicate understeer.

Sounds good, and a chat with Nissan’s development team reveals the cracking old Primera eGT to be an in-house handling benchmark alongside the predictable Mini and Peugeot hot hatch crowd.

So is it the return of a drivers’ Nissan this side of a Zed or GT-R? The signs are good, our only reservation being that if you want a torque-vectored, direct-injected Juke, you have to have a CVT gearbox, too. A six-speed manual is available on front-drive models (alongside 115bhp normally-aspirated 1.6 petrol and 108bhp 1.5 turbodiesel engines), however. The firm expects sales to be split 60/40 in petrol’s favour, though the new DIG unit will account for just 10 per cent of Juke production.

Those looks are worth a mention too, of course. The Juke is a striking thing in the metal, with GT-R and 370Z elements used successfully, though the car’s body sits heavily and makes those 17in alloys appear much smaller. Its opinion-dividing shape is welcome nonetheless, and Nissan admits it plans to re-enter traditional hatchback and saloon sectors in coming years with similar styling and dynamic gusto.

It’ll be sold in Europe, North America and Japan, with UK sales from this September. It’s a bit of a British effort, too – the Juke was designed in the UK, and also safeguards 1000 jobs at Nissan’s Sunderland plant, where all European cars (except AWD-specced models) will be built.

What do you think then? More appealing than a Mini Countryman, or a styling mess? Head to the evo forum and tell all…