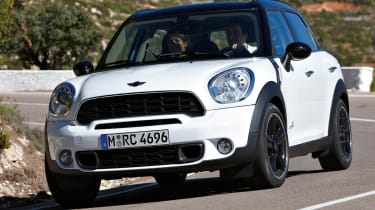 Mini has revealed its fourth model since the car’s 21st century relaunch, and it’s the one set to cause most controversy. Meet the Countryman, the firm’s first SUV. Although with the Clubman often referred to as the ‘Clubby’, we dread to think what this one could be nicknamed…

Tell us what you think about the new Mini Countryman here All-wheel drive doesn’t come as standard, but if you do specify it, then Mini ALL4 is a pretty trick system. During normal driving up to 50 per cent of the car’s power goes to the rear wheels, while extreme conditions will see the Countryman go completely rear-drive. The front suspension set up consists of McPherson spring struts and forged track control arms, with a multi-arm arrangement at the rear. The steering is of the electric power-assisted variety, while the front axle gets an electronic limited-slip diff. Engine-wise, it’s the usual Mini fare, albeit with updated units. Your choices range from the nice and sensible 89bhp One diesel to the sporty Cooper S. The latter is the performance pick for now, with 181bhp and 177lb ft (and 192lb ft via an overboost function). It gets a twin-scroll turbo and direction fuel injection, a first for the Mini Cooper S, and should be capable of over 45mpg. Among the many options available – this is a Mini, after all – is sports suspension, which drops the car by 10mm. There’s an abundance of John Cooper Works gear to choose from, too, but you’ll have to keep your fingers crossed if you fancy a full-strength JCW Countryman – it remains unconfirmed for now. Unlike the Clubman, this is set to be a properly practical new Mini. You’ll find four proper doors and a conventional hatchback, while there’s the usual elevated seats and views that modern crossovers offer and you can pick between two or three seats in the back. Prices start at £16,000 for a 97bhp One Countryman, rising to £20,810 for the petrol Cooper S. The debate is all likely to stem from the styling, however. It’s not a dainty-looking car and is certainly quite striking. To our eyes it translates the Mini look to a chunky SUV about as well as that’s possible, but what do you think?  The Forum’s the place, and you can also catch us on Twitter and Facebook.