The 500 Abarth has arrived in the UK, and in Esseesse form it packs 158bhp. Is it time for the Mini Cooper S to step aside? 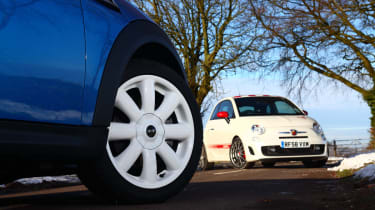 Zig Zag Hill. Eight bends crammed into under a mile of the B3081 south-east of Shaftesbury. Britain’s twistiest road is proving a fitting first venue for this pair of pint-sized protagonists, the Abarth giving the Mini a very hard time around one sequence in particular – a steep uphill hairpin left that tightens at the exit before curving straight into a 90 right.

The 500 – smaller, lighter, grippier, fierier – is all over the back of the Cooper S. It squirms down into second, digs in eagerly, keeps tight control of its nose and squirts up to the next bend, the tight left where photographer Kenny P is standing, Canon poised. The Mini’s driver and I swap seats and go again. Yep, right here the Cooper S feels bulkier, more sluggish, like it’s been caught with its trousers down. It’s still early, but at least the Abarth remembered to buckle its belt this morning…

So far they’ve only spent 25 miles in each other’s company, a pre-rush hour jaunt up from Abarth’s launch hidey-hole in Poole. There was no pre-dawn preamble, just a walk through the hotel’s courtyard, time to take in how different colours alter the 500’s personality and notice that the wheels you can see on this car, although the sportiest, are not the sexiest available. And with that we were on the road, blunt noses and round headlights pointing inland.

We’ve got an Esseesse, one of only three in the country, and based on my previous experience it’s absolutely the one to have. We had a standard 133bhp Abarth 500 (note: not a Fiat) along on eCoty last November (evo 125) and I didn’t have much time for it, putting the Renaultsport Twingo ahead in my final ranking. But this one instantly feels different: stiffer and more responsive. The mods for the SS (typing Esseesse too often risks RSI) focus on how the car goes, stops and steers. A remapped ECU and BMC air filter deliver an extra 25bhp and 18lb ft, the brakes are cross-drilled and matched with softer ‘competition’ pads, and tougher springs are fitted. Yours for £2500, and you get to keep the wooden crate it all comes in.

Something’s amiss, though. The Abarth weighs 105kg more than the 1.4-litre Fiat 500. How has this happened? Fiat admits the suspension has been comprehensively reworked, but we reckon it’s gained stiffer front and rear subframes, and possibly even a stronger shell. A teeny turbo and more standard kit do not add 16 stone.

Not that 1035kg is excessive. It’s 170kg less than the Mini and that hands the Abarth a superior power-to-weight ratio. I’m amazed when I first work that out, but then the 500 does feel genuinely quick. Yes, the Mini will go on to prove faster against the clock by dint of its broader torque and better gearing, but from the bottom of Zig Zag to the top and beyond, where the B3081 opens out into a series of temptingly fast, well-sighted sweepers, the SS keeps pace with the hard-charging S. The Mini’s only way to escape the Italian is to keep the throttle pinned above 80mph, where its superior shove (an overboost function delivers 192lb ft for short bursts) and lower roofline give it a decisive edge.

The Cooper’s polished ponies contrast with the prancers under the Abarth’s bonnet. The British car delivers a clean, meaty, fresh surge from 1500rpm (and a fair amount of torque-steer in second), the Italian a more strident, breathy wave that arrives slightly later and loses composure earlier. Delivery in the Abarth is linear, 5500rpm the natural change-up point. And from the gargly engine note to the puttery exhaust, the 500 holds the aural aces, the boost pod’s flickering needle providing visual accompaniment to the talkative turbo. End result? The Cooper S gathers speed in easy chunks, the Abarth likes to let you know about every mph it’s gaining.

We pick a corner a mile or two up the road to bag some more action shots. It’s a complete contrast to the tight climb up Zig Zag – an open 65mph swoop, partly off-camber. The Abarth shows its hand on the first pass, and I mentally move my bets to the Mini. Two faults manifest themselves instantly and both are fundamental: the steering and the chassis.

At low speeds the grip and firm ride gave me confidence, but now I’m travelling faster, feedback and accuracy matter and the electric power steering fails dismally. No more than a distant hint of information trickles through the squeezable, flat-bottomed rim; an electric ‘tzzzz’ is the only hint that your inputs are having some bearing on wheel angle. It’s such a shame given the grip and tenacity the front end exhibits.

It’s just as well it does, too, because you get precious little help around bends from the back axle. The torsion-beam set-up remains immobile, the rear tyres doggedly following the tracks marked out by the fronts and refusing to aid the cornering process. As a result the 500’s cross-country prowess is entirely governed by that front suspension and the slight adjustment of line allowed by the throttle. It’s not that the Abarth isn’t fun at higher speeds, it’s that it’s less interactive, less engaging than it could – and should – be.

Around the same corner the Mini is far more three-dimensional. Pure naked feel through the steering? No, but the helm is very well weighted and responsive, and cornering angles are more easily adjusted, the rear suspension playing a noticeable role. Barrel in hard and it moves over the road, working the stiff sidewalls of the runflat tyres, making you feel more part of the car, hunkered down behind the wheel.

Here’s why: look at the photo of the two cars in profile to the left. Now draw a mental triangle on each car, the points on the two wheel centres and the driver’s head. See what I mean? See how steepled the Abarth’s triangle is? It’s a tall car and you sit high within it on a seat with a tongue-like backrest that does little to lock you in place. The Mini’s chair isn’t much better, but at least you don’t have the problem of your knuckles and knees smacking into each other.

A good driving position is a key element of any performance car, and the Abarth’s could be cured by dropping the driver’s seat a couple of inches and fitting reach adjustment. I distract myself by ogling the cabin. Sugary buttons on a shiny white slab, plenty of red stitching, chrome used not to look classy, but cheeky. There’s a sense of amusement to the surroundings, just as there is in the Cooper S, although in this Mini that’s diminished by the fully loaded spec. Less is more, Mini fans.

Same goes for outside. Striped Minis are so commonplace they’re now a cliché, but the decaled Abarth (bonnet Scorpion £75, chequered roof £135, side stripes £160) looks awesome. I’m struggling to believe that Fiat is only importing 700 into the UK this year. Surely they should have orders for three times that many for a car that’s so now, so tuned in to the current climate?

Kenny interrupts my musings to point out that time is pressing and we have places to be. Neither of us knows Dorset that well. My knowledge starts with Thomas Hardy and finishes with Hugh Fearlessly-Eatsitall, touching on just one notable geographical feature: Chesil Beach. So that’s where we’re going.

But in this part of the county all roads lead to Dorchester, or rather the main ones do, so heading east-west rather than north-south is best accomplished on minor roads. That’s what I tell Kenny as we embark on a 45-mile strop down roads glistening with mud, grassy mohicans marking the centre line. The Abarth is at its bombastic best here, tearing along, leaving the equally eager Cooper S trailing in its wake. It’s not sophisticated, the 500, but boy does it know how to entertain.

The gearbox isn’t the most robust feeling but it seems to enjoy being wrenched from gear to gear, and despite only five speeds it has every eventuality covered (at a push, even motorways). Not so the brakes. They may be uprated but a couple of high-speed halts leaves them – and you – gasping. Sharp stops are a nervy business and you don’t have to hit the stoppers too hard before you hear ‘tinker-tinker-tinker’ as the hazards flash to warn following traffic. Which is the Mini and nothing else. I had no idea Dorset had so much to offer. The Bs 3091 and 3143 are great hot-hatch roads, you never know where they’re going next as they twist and turn with the landscape.

It’s the perfect acid test and the Abarth is again found wanting. Initially the firm suspension refuses to get out of sync with the road’s surface, but then a particularly bucking section undoes it completely, jouncing me out of the seat. But at least it feels tough, far more robust than the standard 500, with far more axle control and dampers that can actually retain a modicum of cushioning in extremis.

The Mini? More professional. Occasionally bobbly, sometimes sniffy under braking, but a comfortable experience and a more stable platform from which to observe the patchwork-quilt fields draped over these sleepy valleys. We pop out at Abbotsbury having answered a number of questions. Firstly, there’s no point disengaging the Esseesse’s Sport mode. Lighter steering and an obnoxiously flickering economy-mode change-up light? No thanks. Torque Transfer Control? There’s a button for it hidden amongst the heating controls, but it’s not even close to being the pseudo limited-slip diff it purports to be when all it does is brake an inside wheel to stop it spinning. At least it disengages the traction control (the un-switch-off-able ESP rarely intrudes). On a more everyday note the turning circle ain’t that tight for a little car, the gearbox often grinds when finding reverse and 16 grand is a lot of money for a jumped-up city car.

But none of this matters. It doesn’t even matter that, aside from Zig Zag Hill, every move the Abarth has made all day the Cooper S has had covered. Why? Because the 500 knows how to have fun. It’s an extrovert, pure and simple, and like all of life’s characters, the Abarth is great to spend time with, leaving an empty space when it’s gone.

I’m reminded of this the next morning (after an evening that confirmed we brought along exactly the right rival – the Mini is the only other car mentioned in the press conference). I’m up and out at 5am, just to have a pure, unashamed, no-holds-barred blast. Down past Clouds Hill (once home to Lawrence of Arabia), further down to the Jurassic coastline at Lulworth, then back via the often closed military ranges road. All to the tune of a poppety exhaust, gruff engine and fizzing turbo, accompaniment ably delivered by the torque-rich delivery and a chassis hinting that it’s only just able to cope.

The Abarth isn’t a genuine talent, it can’t match the Mini’s completeness, but despite the flaws it is emphatically not an ersatz hot hatch, a fashion trinket done up in sporting bling. It knows how to show you a good time. That’s enough. More than enough.