2019 Mini Cooper review - retro supermini as polished as ever

Since BMW brought the Mini brand back from the dead in 2001, the Mini Cooper has been a stalwart in the supermini class, combining funky looks and an entertaining driving experience with typically high quality German build and tech. The current third-generation model has been on sale since 2014, moving to a new set of underpinnings shared with other BMW models.

This decision to move the Mini onto a shared platform with other models within the BMW line-up was made to help spread costs and include high-specification technology, but in the process relegated the sophisticated, but expensive platform of the previous two generations of Mini to retirement.

> Click here to read our review of the Mini JCW Challenge

As of 2018 the standard Mini hatch, along with its five-door hatch and Cabriolet variants, received a gentle update, upgrading tech, adding new LED lights front and rear (more on those later), as well as tweaked engines to further improve MPG and CO2 figures. Question is, does the new Mini Cooper address the issue we had with the pre-facelift model’s fairly staid driving experience? 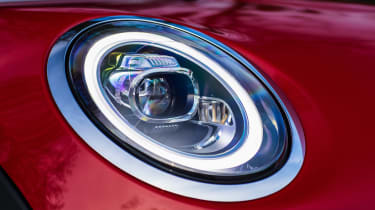 > Engine, gearbox and technical specs – There's a wide range on offer, from a naturally aspirated three-cylinder petrol and three-pot turbodiesel, through to a turbocharged three and four. The six-speed manual is more fun than the dual-clutch auto.

> Performance and 0-60 time – Basic models don't look great on paper, but feel peppy enough on the road. Coopers have the measure of their closest rivals, while the Cooper S is a near-150mph car.

> Ride and handling – Ride has improved over the previous Mini, but it's still as nimble on a twisty road. The five-door only trades a little of the three-door's precision. Basic models are nearly as fun as the more expensive ones, pleasingly.

> MPG and running costs – Mini has now moved to WLTP regulations, hence apparently higher consumption than than before. MPG of 52.3 isn't bad at all for the Cooper; S is around 10mpg shy of that.

> Interior and tech – The retro interior styling remains a love-or-hate attribute, but quality has never been better in a Mini. There's more space than before, too.

> Design – It's a Mini – which means it looks like a car from the 1950s inflated to 2019 proportions, with varying levels of success. But those tail lights… 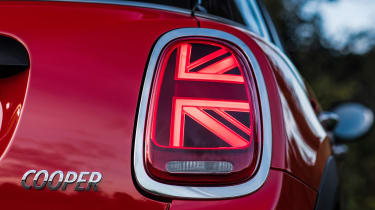 Prices start at £16,190 for the basic Mini One Classic hatch, opening up the range with a naturally aspirated 1.5-litre three-cylinder engine with 101bhp. Standard equipment has been improved over the previous model, with those distinctive LED lights at the front and rear now standard. Mini now also fits a 6.5-inch colour screen across the range, replacing the previous car’s old dot-matrix screen.

Next step up is the standard Mini Cooper Classic, adding a turbocharger to the three-cylinder engine for a more lively 134bhp. At £17,630, the Cooper’s pricing puts it at around the same as an equivalent Audi A1, but thanks to its recent upgrade in standard equipment, has the edge in value terms. Look outside the premium sector, and the Mini’s pricing also looks favourable next to cars like the Suzuki Swift Sport, although the Ford Fiesta ST’s aggressive £19,495 will be a consideration for those craving great-value performance.

> Click here for our review of the Suzuki Swift Sport

Above this you'll find the Cooper S Classic at £20,920. 2019 pricing hasn't yet been announced for the Cooper S Works, nor the Cooper D, pending WLTP changes. Those prices are all for the three-door variants too, of course. Five-door models cost £700 more, respectively, and dual-clutch automatic models are a further £1400, which does mean a basic £17,630 Cooper Classic can start to look quite expensive if you need more doors and want to dispense with the left-hand pedal. More still if you want to drop the roof – the Mini Cooper Classic Convertible begins at £20,080, or £2450 more than the three-door hatch.

As mentioned previously, all Minis come with full LED lights front and rear and a 6.5-inch colour display, while keyless push-button start, climate control, DAB radio, Bluetooth and USB connection are all standard fit, too. You'll need to option alloy wheels for the One, but the Cooper gets 16-inch items as standard, and as always, the choices for personalisation are nearly endless on any Mini.