Nissan Juke review - still fun and funky, but no longer the best

Nissan has gone on to repeat the success of its Qashqai crossover with the Juke - albeit on a smaller scale. It remains one of the best junior crossovers on the market, carving out a niche for itself below the likes of the Mazda CX-3 and outgoing Skoda Yeti and making for a far more interesting proposition than most superminis it's priced on a par with. Saying all that, we're not convinced by the gaudy personalisation options and it really should be more efficient than it is.

Nonetheless, the Juke drives well for the segment and it certainly stands out. The hotter Nismo RS can be a bundle of fun in the right circumstances too, but as we found out with our long-term evo Fast Fleet example (you can read about it in full in the "living with" section), some of the Juke's quirks can be tiresome to live with if you're more familiar with traditional hot hatchbacks. 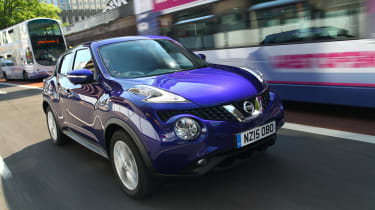 > Engine and gearbox - Diesel will suit most, but the 1.6 DIG-T of the Nismo RS, with the manual gearbox, is the most satisfying combination. Shift quality is best in the Nismo, too. Read more about the Nissan Juke's drivetrain.

> Ride and handling - Feels suitably sporty in most trim levels, though you do compromise on ride quality. Once again, the Nismo RS works best: nice damping and better steering than the others. Read more about the Nissan Juke's ride and handling.

> MPG and running costs - The diesel and 1.2 petrol are both frugal, if more so on paper than they'll do on the road. No Juke is really thirsty though. There's a decent warranty, fixed-price servicing and relatively low insurance too. Read more about the Nissan Juke's running costs.

> Interior and tech - Interior design is becoming dated and there's limited space, but the Juke Nismo RS, with its sports seats and Alcantara trim, feels great. Read more about the Nissan Juke's interior.

> Design - Still divisive after all these years but that doesn't seem to be harming sales. Read more about the Nissan Juke's styling.

> Living with a Nissan Juke - Our Fast Fleet car had an alignment issue, fixed early on. Wasn't quite as fun as a proper hatchback, but an interesting daily driver. 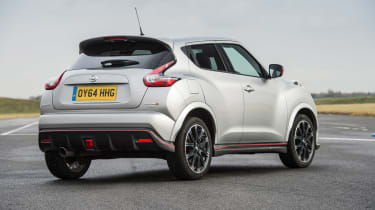 Nissan offers the Juke in five trim levels: Visia, Acenta, N-Connecta, Tekna and Nismo RS. The latter is the most expensive, at between £23,105 and £25,510, but Juke ownership starts at a reasonable sounding £14,590 on-the-road. However, that's for the not-so-desirable Visia model powered by the old-school 1.6-litre petrol engine, and there's a sizeable jump to £16,495 to the next Juke on the price ladder, the 1.2 DIG-T version in Acenta trim.

Rival junior crossovers include the Peugeot 2008, Renault Captur, Mazda CX-3, and Ford EcoSport. The latter isn't even worth considering - it's uncompetitive in virtually every area - but the former trio have merit, particularly the sporty CX-3. The Renault is similar under the skin to the Nissan, but feels a little more modern. The Juke remains one of the more affordable options though, and none of its rivals have a sporty model like the Nismo RS.

Other rivals for the Juke will soon be on the way, including the Citroen C3 Aircross and Hyundai Kona. The former will undoubtedly major on comfort and the latter may well challenge the Juke for value. SEAT's upcoming Arona could prove fun, too. 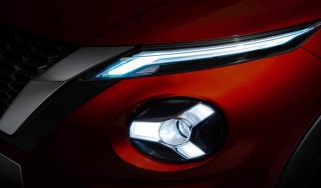 Nissan IDx definitely dead, but new Juke will be ‘innovative and exciting’ 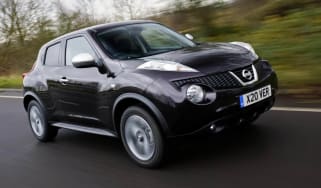 The Shiro is a special edition Nissan Juke with lots of lovely trim - we drive it in 1.5 dCi form
Visit/nissan/juke/6976/nissan-juke-16-dig-t-tekna-4x4-cvt-review 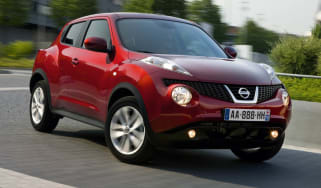 We drive the top spec Nissan Juke, with 4WD, a 187bhp 1.6 turbo engine and a CVT gearbox
Advertisement
Visit/nissan/juke/6870/nissan-juke-16-turbo-petrol-review 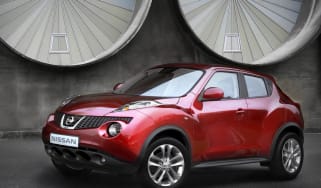 Nissan's Juke takes the Qashqai crossover formula and applies it to a supermini with entertaining results.
Visit/nissan/juke/11149/nissan-juke-priced 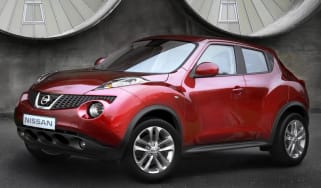 Nissan prices its Juke mini SUV, as it gets ready to fight the Fiesta, Mini, and Audi A1
Visit/nissan/juke/10960/nissan-juke-official-details 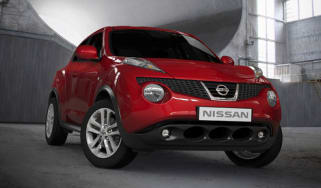