Buyers considering the Juke need to align their interior space expectations with those of a supermini, as that's the size of the junior Nissan crossover in reality. Hence it should be no surprise that the rear seats offer acceptable accommodation for two adults rather than generous space. In fairness, the Juke is quite wide so there's distinctly more elbow room than in some of its rivals. Thankfully, the sloping rear hatch doesn't impact on passenger headroom as you might expect either.

Up front, thanks to revisions in 2014, the Juke's cabin is of higher quality and comes with a decently tactile leather steering wheel (Acenta and up), plus little tweaks here and there to the storage compartments make it more useful. There are, however, more personalisation options for the interior now than ever before and we don't necessarily see that as a good thing. Yellow air vent surrounds anyone? No thanks, not in this car. Mercifully, other hues are available. 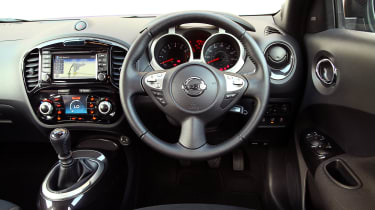 The biggest improvement to come with those mid-life updates was an increased boot capacity. At 251 litres, the original Juke had less boot space than the MINI 5 door, but Nissan's engineers went to work on the car (presumably with some big chisels and hammers) and now all front-wheel drive Jukes carry up to 354 litre.

And the Nismo RS? The cabin has to be one of its better features. The standard seats are perhaps a bit squashy and perched for a performance car (albeit surprisingly comfortable) but there's always the option of a pair of pukka Recaros like you'll find in numerous other hot hatchbacks. The steering wheel gets an Alcantara rim as it does in the Nismo 370Z and GT-R, there's a red-ringed rev counter and a stubby gearlever that's quite satisfying to use.

Perhaps the best aspect of the Juke's cabin is the driving position. While you sit high in relation to other traffic and have a fairly lofty view over the bonnet, you don't feel like you're in an SUV - the centre console places the gearlever higher up than many normal hatchbacks and while it's hardly low-slung, you don't feel like you're sitting above the pedals either.