There's a marked difference in performance between the DIG-T models at the top of the range, with their turbocharged 1.6-litre engines, and the rest of the Juke line-up. The manual model can hit 134mph and does 0-62mph in 7.8 seconds. Despite extra traction, the four-wheel drive version is slower, at 8.1 seconds, which is somewhat explained by its 130kg weight penalty and the fact it's only available with a continuously-variable transmission.

At the bottom of the range is the deeply unsatisfying naturally aspirated 1.6-litre petrol engine, taking a laborious 12 seconds to hit 62mph from rest. When specified with the CVT automatic, this engine is uprated from 93- to 115bhp, which helps the auto knock half a second off the benchmark sprint, but it doesn't sound good in doing so. The 10.8-second time recorded by the 1.2-litre DIG-T model illustrates one of the benefits of downsized boosted petrol engines, but it's quite a strained sounding unit if used to extract its maximum performance. 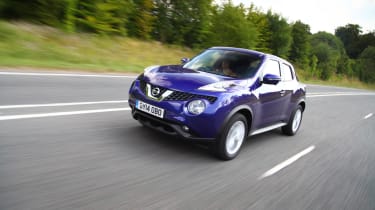 Other than the expensive 1.6-litre turbo units at the top of the range, the somewhat surprising star in terms of drivability is the 1.5-litre diesel, with its modest 108bhp and relative smoothness. It posts an acceptable 11.2-second 0-62mph time, but more importantly it feels amply quick enough during in-gear acceleration.

For reference, the bonkers looking Nismo RS version isn't as quick as you'd expect, with a best 0 to 62mph time of seven seconds dead for the manual version. It doesn't sound quite as good as you'd expect either - a characteristic similar to the Renaultsport Clio 200 with which it shares an engine - but on thrills it's the best model in the Juke lineup.