Leaving the frankly hilarious Juke Nismo RS aside for now, Nissan's baby crossover is available in six disparate variants, all but one of them sending their power to the front axle only. The old-school naturally aspirated 1.6-litre petrol engine is offered in two formats: five-speed manual, 93bhp; or Xtronic CVT automatic, 115bhp. We're not fans. A more satisfying petrol option is the relatively new turbocharged 1.2-litre DIG-T engine, producing 113bhp and 140lb ft of torque.

The sole diesel option, Nissan's venerable 108bhp 1.5-litre dCi unit, comes with a six-speed manual gearbox only. At the top of the non-Nismo line-up is another DIG-T unit, this time a turbocharged 1.6-litre engine producing 187bhp and 177lb ft, the latter from 1600- to 5200rpm. It's available in front- or four-wheel drive, the former with a six-speed manual and the latter with that Xtronic CVT automatic. 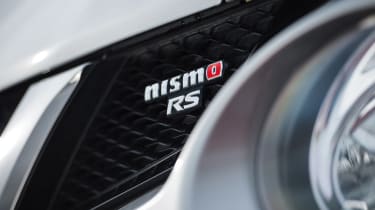 It's a shame there's no manual option with the all-wheel drive  and we'd really rather a dual-clutch auto over the droning CVT option.

The Juke Nismo RS uses much the same engine and transmission options as the DIG-T models, but tuned for greater performance. It makes 215bhp at 6000rpm and 206lb ft of torque from 3600-4800rpm. The latter spread belies that this 1.6 doesn't quite have the same low-down urge of many modern turbocharged units.

You need to work it harder as a result and it's not a pleasant-sounding engine when you do so, but there's undoubtedly pace to be found. Better is the manual gearbox - it's snappy and satisfying, slicing cleanly between ratios. The lever is placed conveniently too, putting the gearknob within quick reach of your hand fairly near the steering wheel.