Even after Nismo's best efforts the Juke becomes 'entertaining' rather than dynamically competent, so what hope for the standard variants? Well, they drive better than most of their rivals, which is a good start, but you definitely get the impression that you're in a tall supermini. That's great in town where the high driving position and pert dimensions make it easy to park and manoeuvre (in spite of poor over-the-shoulder visibility), but out on the open road the suspension never really settles down, especially in versions with larger wheels, and the electric power assisted steering is largely inert.

Up front there are MacPherson struts with coil springs and at the rear there's a torsion beam axle, also with coil springs. The four-wheel drive version gets a more sophisticated multi-link rear suspension layout, but allied to the CVT gearbox it doesn't encourage you to press on, despite featuring torque vectoring where the engine output is not only divvied up between the front and rear wheels, but also across the rear axle. It is handy when the going gets slippery, as the front-wheel drive models can all too easily spin the inside wheel when exiting junctions or tight corners in damp conditions.

If you resist the lure of 18-inch alloy wheels, the Juke is acceptably comfortable and refined at a fast motorway cruise. It's also notably stable in that environment, or when braking heavily. Up front are ventilated discs and they're complemented by solid discs at the back, with anti-lock etc. as standard of course. 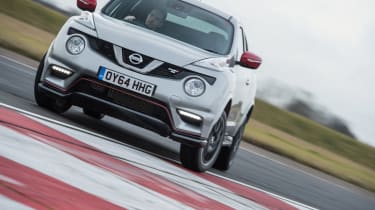 All versions include what Nissan calls 'Brake-LSD', which aims to mimic the action of a mechanical limited slip differential by applying the brakes to a spinning wheel, but it's only really of use in the higher powered Jukes and they're more satisfying to drive well within the limits of adhesion in any case. The Nismo RS gets a proper mechanical LSD in front-wheel drive form.

The Nismo model can be fun - its damping in particular is impressive, dismissing road imperfections in a way that few other traditional hot hatchbacks can manage - but it's also illustrative of the inherent downsides of a taller crossover body.

In short, it rolls more than regular hot hatchbacks, doesn't have the same levels of grip, and the higher driving position (while great for forward visibility) never quite puts you in the thick of the action like a normal hatch. If you're sold on its quirks though, you'll probably accept its limitations. The roll also gives the limited-slip differential plenty of work to do, which results in the steering wheel tugging at your hands. It makes the car feel lively, but others may find it hard work.