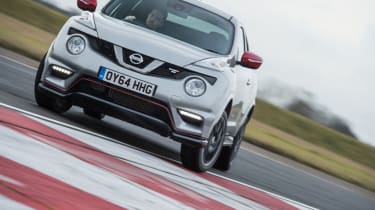 You’ll already know that the Juke Nismo RS doesn’t stack up as a hot hatch because it’s too tall and high-riding for that, and equally it doesn’t quite work as a small family crossover because it’s too stiff and expensive compared to the mainstream model.

The Juke’s extraterrestrial aesthetic – as with the earlier Juke Nismo that this RS version replaces – has been pumped up with aggressive bumpers, 18-inch wheels and contrasting door mirrors. The red accent lines tie it in neatly to the fearsome GT-R Nismo, but there the likeness ends. 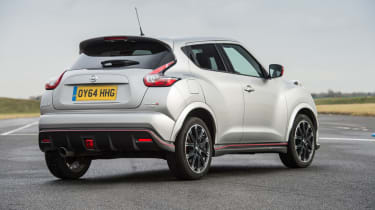 Whereas the halo GT-R boasts close to 600bhp, the Juke makes do with 215bhp (up 18bhp on the outgoing Juke Nismo). The engine is a 1.6-litre, four-cylinder turbo, which feeds the front wheels via a six-speed manual and a limited-slip diff. Nissan claims that the 0-60mph run takes exactly seven seconds. A four-wheel drive Nismo RS option also exists, but only with a CVT. The engine lacks the low-down torque response of the very best turbo four-cylinder engines – note the peak torque output of 206lb ft from 3600rpm and compare that (I know, I said I wouldn’t…) to the Peugeot 208 GTI 30th Anniversary’s engine, which makes 221lb ft at just 1750rpm. 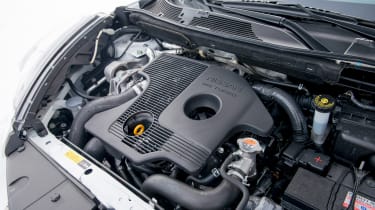 The MacPherson strut front suspension and torsion beam rear axle have been retuned with firmer springs and dampers, the brake discs are now 320mm in diameter up front and the bodyshell has been stiffened. Despite that more focused chassis tuning, the Juke Nismo RS actually rides with a gentle fluidity that evades most conventional hot hatches. It’s a sporting car so there is a sharpness to the way it deals with bumps, but there’s also effective and cushioned damping. 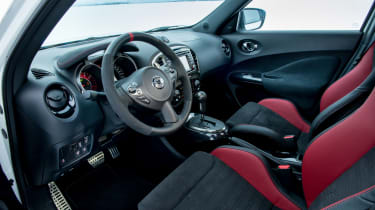 The Nismo rolls quite markedly and it’s this lack of flat-bodied response that limits dynamic potential. Turn into a medium-speed corner and the car leans, then pushes into understeer. That is the Nismo’s MO, and it can’t be persuaded to do anything much else on the road. The same is true on circuit, except that in fast corners sheer momentum alone, rather than any particular rear-biased chassis balance, will see the back step out.  The gearshift quality is of the highest order and the LSD distributes the torque across the front axle effectively. However, under load there is excess wheelspin from the inside wheel that triggers the traction control. It doesn’t give the impression of the car being pulled through a corner by a taut rope – but it is better than an open diff. 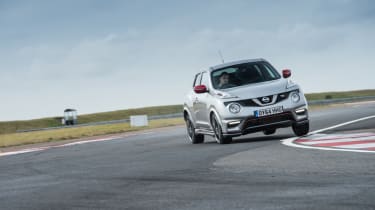 The artificial weighting and slightly aggressive self-centring response give the steering an elasticity that totally corrupts any messages that might be filtering through from the front axle. That makes turning into a corner at speed a guessing game, which isn’t helped by the modest turn-in bite. In short, this isn’t a car that naturally and effortlessly carries speed.

The Juke Nismo RS needs to be approached from an oblique angle rather than head-on, because it so roundly defies the normal conventions of genre and category. This is not a car that stands up well to objective scrutiny, but it is different and for that I like it. Approach it as the curio that it is and do not  be drawn into fruitless comparisons with Focus STs and the like.