Nissan's Juke takes the Qashqai crossover formula and applies it to a supermini with entertaining results. 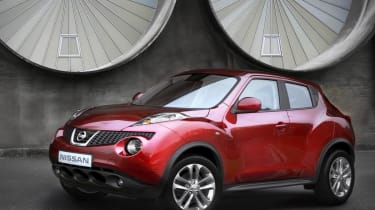 The Juke is a tall, wide supermini-based ‘crossover’ from Nissan that mixes an SUV stance with sporty styling. Adding to the mixed influences is an interior that’s apparently been inspired by a motorcycle, meaning the Juke is quite unlike anything else out there. Three engines are offered, but only the new 187bhp turbo engine is of interest to us. Technical highlights

The 1.6-litre direct injection petrol engine comes with a low friction lightweight design turbocharger and intercooler with twin variable valve timing (on the intake and exhaust cycles) to improve low-end response. Dubbed DiG-T the 1.6-litre certainly punches above its low capacity, with smooth, quick response and an impressive 2,000-5,200rpm peak torque spread. Rumour has it that it'll eventually make its way into the next generation Renaultsport Clio.

Despite SUV looks only this engine will be offered in four-wheel drive. The flagship 4x4 comes with torque vectoring - much like a 911 Turbo’s four-wheel drive hardware. You don’t need it - and it adds 0.4 seconds to the front-wheel drive’s 8.0 second 0-62mph time - but worst of all it’s attached to a CVT transmission. We’re driving the front-driver.

Some of the usual supermini verve has undeniably been lost in the Juke’s translation to a crossover model. It’s based on the same platform as the Micra and Renault Clio, so there should be some talent underneath its overt looks.

The wide stance helps in the bends, while the suspension provides decent ride and capable handling. That ride might suffer a bit in the UK thanks to the large 17-inch alloy wheels, and inevitably gravity eventually gets the better of the body in tighter bends but the Juke is surprising fun on a twisty backroad. Just don’t expect any feel from the steering wheel or lightning fast shifts through the six-speed manual gearbox. The engine feels strong and free-revving though, goading you to drive it a bit faster.

To what exactly? The Juke’s pretty much on its own in the marketplace. Mini’s Countryman is similar in concept but differs a lot on price - the petrol DiG-T starting at £15,695. Compared to regular superminis and hot hatches it’s a bit more expensive, but good equipment levels and look-at-me styling offset the difference.

Nissan has added Nissan Dynamic Control System, which allows a choice between Normal, Sport and Eco driving modes - you’ll struggle to notice any difference despite claims of a retuned throttle map in Sport mode. It’s no hot hatch, but it’s not trying to be. It’s fun though, in a strange kind of way.