The Shiro is a special edition Nissan Juke with lots of lovely trim - we drive it in 1.5 dCi form 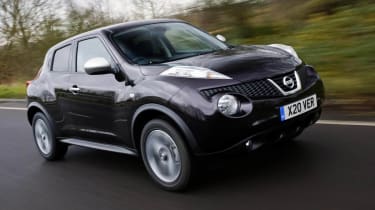 What is it? The Nissan Juke Shiro, a special edition of the Japanese firm’s ‘supermini coupe’. We’ve driven it in 1.5 dCi diesel form, which costs £19,195. Technical highlights? Shiros sit above the usually range-topping ‘Tekna’ models, but add little other than cosmetics. Shiro translates as white, a colour you’ll find on the centre console, door pulls and stitched into the leather seats. There’s also copious standard equipment – heated seats, climate control, touch-screen satnav, reversing camera, speed sensitive power steering… we could keep going. The Nightshade paint you see here is exclusive to Shiros, too. Most interesting is the ‘Nissan Dynamic Control’, which switches between eco, normal and sport modes for the powertrain (predominantly the throttle response) and electronic displays, which vary from eco ratings and graphs to torque-, power- and G-meters. What’s it like to drive? Not as wacky as it looks. With this diesel engine fitted, it’s fairly plain – 109bhp driving 1.3 tons does not a fast car make. The turbo spools up keenly enough, though, and if you’re in the right gear the little 1.5 is responsive enough.  Our previous drives in quicker petrol Jukes have revealed a fun little car to punt around; with a diesel engine up front, there’s noticeably more understeer to contend with, and the Juke’s jacked-up height means there’s a fair bit of body roll. Ride quality is largely good, though, and the steering is light but precise. It’s not a bad car to drive, it’s just – in diesel form, at least – very unexciting. A back-to-back go in a Nissan Note mini-MPV with a similar engine revealed a sharper car, too, thanks to its noticeably lower centre of gravity. It confirms the Juke as more style than substance. How does it compare? Nearly 20 grand is too much money for a Juke that’s so slow; an entry-level Juke dCi is just £14,795. For Shiro money you can buy a 141bhp Mini Cooper SD or 109bhp Citroen DS3 HDI DSport, cars which offer similar style and space but more driving fun. Anything else I need to know? Our pick of the Juke range is the 187bhp 1.6 petrol in front-drive, manual form, which costs £16,595 in ‘Acenta+’ trim. It’s not as glitzy as the Shiro, but it’s a decent drive and much better value. Shiro trim is available on all Juke drivetrains, however.