Citroen continues its design renaissance with a crossover take on the C3; pricing and November launch now confirmed 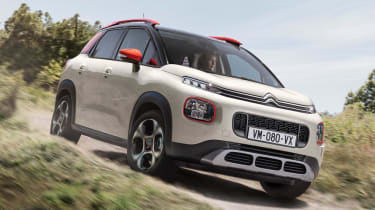 Citroen is throwing its hat into the Nissan Juke ring with the new C3 Aircross, a compact SUV that continues with Citroen's recent revitalisation of its design and engineering-led roots.

Not that a small SUV is a particularly original idea, nor is it likely to feature alongside some of André Lefèbvre or Flaminio Bertoni's works in the more fondly-remembered sections of Citroen's history, but small SUVs are big business, and if we're to have them at all then they might as well be interesting.

> Citroen C3 review - Supermini sets new standards for comfort, but is it fun?

The C3 Aircross is certainly that, following on from the C4 Cactus and more recent C3 supermini with styling that suggests it's somewhere between automobile and modern kitchenware. It goes on sale in November with pricing starting at £13,995.

It follows on closely from the C-Aircross concept revealed earlier this year in Geneva, with a stubby bonnet, high-set LED daytime running lights in a wide grille bar, and lower, separate main light units. Its floorpan sits 20mm further from the road than the regular C3 - probably not enough to cross the Darién Gap, but perhaps a little more suitable for kerb-hopping - while tough-looking plastic wheelarch and sill extensions lend it the obligatory toughened-up look. 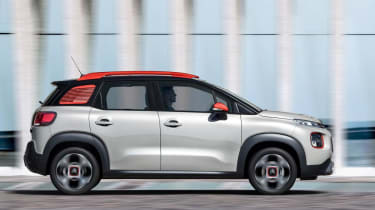 Customers will then be able to personalise their Aircross with eight different body colours, four roof hues, four colour packs and a selection of different wheel options, for 90 different exterior combinations.

This continues inside with five interior themes - standard, Metropolitan Grey, Urban Red, Hype Mistral and Hype Colorado - to jazz up the C3-based cabin, already one of the more inviting interiors in this class. The company says the C3 Aircross cabin will offer class-leading space and the largest boot in the segment too (up to 520 litres with the sliding rear bench), as well as traditionally-Citroen comfortable seats.

Citroen promises "an SUV driving experience" (didn't that used to be something crossovers were originally designed to avoid?) and PSA's Grip Control system, a clever traction control that can be adjusted according to the surface underneath. No all-wheel drive version will be available, so that's as advanced as it gets. 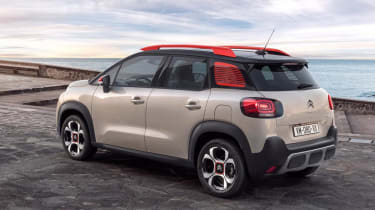 Six engines will be available, of which the 1.2-litre turbocharged PureTech 130 (with 128bhp) is likely to be most entertaining. Priced from £16,600 in 'Feel' trim and £18,400 in range-topping 'Flair' spec, the three-cylinder unit comes with a six-speed manual gearbox, an option also found in the PureTech 110 (from £16,200), which also has a six-speed auto option.

The company boasts 12 different driver assistance systems, among them a head-up display, automatic high beams and the aforementioned Grip Control, while a 7-inch interior touchscreen allows access (albeit frustrating access, if Citroen's existing touchscreens are indicative) to the car's infotainment functions.