The Kona hits back at compact crossover competition with a distinctive look, advanced driving tech and optional four-wheel drive 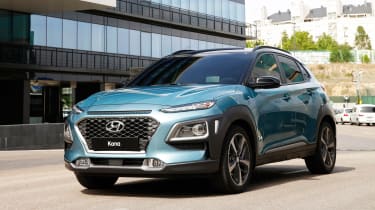 Hyundai will be entering the compact SUV fray with the intricately styled Kona, an all-new rival to the ever popular Nissan Juke and Peugeot 2008. Unlike most rivals, Hyundai is touting the Kona’s optional all-wheel drive drivetrain, an unusual option in this class, as well as the option of a new dual-clutch gearbox and new turbocharged petrol engines.

The reality of how entertaining the little SUV will be to drive is still up for discussion, but you can’t deny that Hyundai’s increasingly staid design language has been given a thorough going over, instilling the Kona with distinctive, if not necessarily attractive sheet metal.

At the front, Hyundai has used the same cascading grill seen on other models like the i30, only this time supplemented with a Citroen-style split LED lighting arrangement and a sleek grille that blends into the bonnet.

>Click here to read our preview of the i30 N hot hatch. 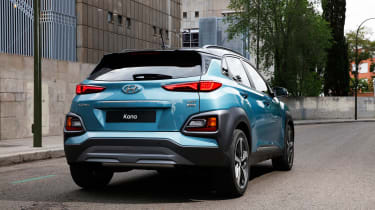 The black plastic cladding on the bodywork has been more seamlessly worked into the overall design as compared to most rivals, and split lighting also appears at the rear. The Kona also benefits from the now common option of a contrasting roof, plus various wheel combinations.

Hyundai will offer the Kona with three engines, initially offering a 118bhp 1.0-litre turbocharged petrol matched exclusively with a 6-speed manual and front-wheel drive and a more powerful 1.6-litre turbo with 175bhp. A 1.6-litre diesel will eventually be added to the range in two power outputs (113 and 131bhp). The two higher-powered models respectively will also both be available with all-wheel drive and a 7-speed dual-clutch gearbox (exclusively in the case of the petrol).

Hyundai has also decided to fit the Kona with a multi-link rear axle with the intention of improving ride and handling, alongside a sophisticated traction control system called Advanced Traction Cornering Control. Admittedly these offerings may not be of too much use with a maximum power output of 175bhp, but Hyundai's newly formed N performance division may be called in to improve that... 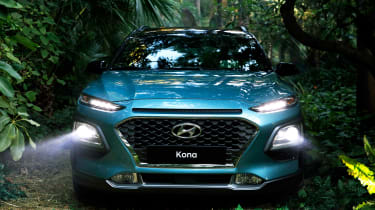 Inside the Kona will continue Hyundai’s current interior design language, with a floating infotainment screen sitting atop the dashboard, compact HVAC controls and, for the first time in a Hyundai, a heads-up display.

With prices starting at around £15,000 when it reaches showrooms in November, the Kona has an increasingly diverse and talented group of rivals to compete with, but believes its small SUV has what it takes to rival the class leaders. It may not be the most evo car in the world, but alongside the brands upcoming i30 N hot hatch, Hyundai looks to be pretty serious about becoming a proper player on the world stage. Unfortunately for us, the compact SUV is becoming just about the most important piece of that puzzle. 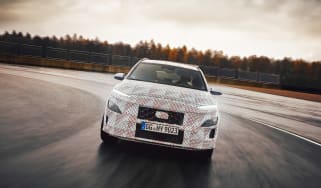