In 370Z form, Nissan’s characterful coupe is now keener and more powerful than ever, but is it enough to worry Porsche’s recently revised and also more potent entry-level Cayman? 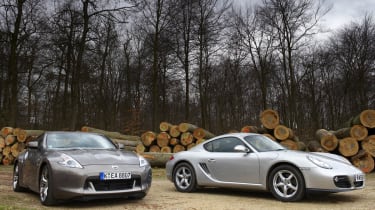 Hands up if you think the Nissan 370Z might just have what it takes to duff the Porsche Cayman up, or at the very least administer a sharp poke to the Bavarian’s eye. Well, join the club. And here’s why…

The 350Z was a Seventies coupe re-imagined for the Noughties. A straight-talker. No bullshit but a bit of swagger. You get the feeling Gene Hunt would approve. And according to Nissan, the new 370Z ‘offers more of everything’. Here are just some adjectives that describe the changes (I’m sure you can work out how to use them): lower, wider, lighter, stiffer, shorter, faster, cleaner, grippier.

Not cheaper, but not far off. £26,895 buys the base Z, which gets you most of the bits you need (slippy diff, keyless go, xenons), but as before it’s the ‘GT Pack’ version (£30,195) that’s the one to have, especially as it now adds Synchro Rev Control, which, we confidently predict, will trump all other car-based pub gossip for the next 12 months. More later.

Thirty grand is still affordable though, especially when lined up next to a Porsche Cayman. £36,101 is the price of admission here, but it’s best to treat this as a stepping-off point and brace yourself for the options impact, which on this car takes the tally to £44,426. Porsche even charges extra for floor mats…

It’s just as well this car was equipped with the £1016 bi-xenon lights, though – without their bluey twinkling there’s every chance I wouldn’t have noticed Henry as we drove towards each other in the centre of Pierrefonds. A silver Cayman wearing fat black donuts for tyres is a rather unprepossessing thing.

We’ve just driven the 370Z up from Nissan’s Paris launch, while Henry brought the Cayman across on the Eurotunnel yesterday evening and has spent the time when he should have been having his breakfast busily scouring the area for good roads. It’s been productive.

We’re off to bag some cornering shots first, so I follow the snake-hipped Cayman out into the countryside. The rear view is the Porsche’s best aspect, which isn’t saying much. I quite like the new leaf-shaped rear lights but to my mind the flat tailgate has always contrasted oddly with the voluptuous rear arches. Nissan, meanwhile, has done its best to lower the tone of the 370Z by painting this example sludge brown, a shade that almost perfectly complements the undergrowth in the Forêt de Compiègne. Visual weight is carried to the back of the Zed via the descending roofline, emphasising the rear-drive muscularity.

Looking at the two coupes tells you a surprising amount about how they tackle our chosen corner – a long, open hairpin that climbs quite dramatically at the exit. The Porsche works all four tyres evenly, the weight centralised within the chassis, trajectory minutely adjustable via the throttle. It pops out over the crest without so much as a squirm. The Nissan is more, shall we say, flamboyant, the rear end governing the angle of attack. Traction off, turn-in, get on the power and feel the weight and emphasis drop onto the broad shoulders of the rear 275/35 ZR19 Potenzas. An extra mid-corner prod arcs the tail wide. It’s a happy, magnanimous, easy slider that enjoys demonstrating its prowess. Just like the old 350Z. What’s changed is the 100mm shorter wheelbase, the rear wheels brought forward, nearer to your backside, so any movements beneath it are magnified.

There’s now more power to be magnified, too. The 3.7-litre V6 develops 326bhp (up 17bhp) and is gutsier than the lofty 5200rpm torque peak would suggest. It feels fast enough to keep a 911 honest and should make mincemeat of the 261bhp entry-level Cayman, but here’s the thing. As we depart the corner, aiming for Henry’s second find, I’m in the Porsche, and for the next ten miles, whether we’re pummelling straights or pulling out of second-gear bends, the Nissan’s advantage is slight. The Cayman’s new 2.9-litre flat-six isn’t direct injection but, together with the now standard six-speed gearbox, it gives the car a far more suitable amount of go. Porsche has done this before, when it chopped the Boxster’s 2.5 in for the 2.7, and the same applies here – the basic Cayman is no longer an underpowered weakling, it now has the performance necessary to work the chassis and be truly enjoyable.

And it’s such a nice engine to use: rich in character, varied in tone, louder in volume than the Nissan’s and truly special above 4000rpm. Combine that with a beautifully palmable gearshift and precise control weights and, as Henry points out, ‘the more finely you work at the controls, the more it seems to reward’. Driving the Cayman from A to B is a fingertip experience. As I’m about to find out, the 370Z requires rather more…

Location two is a road, of that I’m pretty sure because it’s black and tarmacky, but such are the corrugations, ructions, kinks, lumps and cambers that it feels like a thin veneer of macadam spread over an old drover’s track. We drive to the end and back. No nasty suspension clonks upset the Porsche’s whisper-quiet cabin, but I resolve to make no firm judgements until I’ve punted the Nissan up and down a few times. Ahead the 370Z looks purposeful, running at rough corners keenly and, despite more lean and the occasional shimmy, I sense Henry is having more fun.

In fact he’s a bit hot and bothered when we swap over. ‘That’s surprisingly hard work,’ he says. ‘The suspension felt jittery at the rear, slightly aloof at the front. It never crashed, but the damping couldn’t quite keep up. It would deal with one bump but would still be settling itself when the next one hit.’

He’s bang on. The 370Z can’t keep up with the work-rate this road demands, the steering losing feel, the whole chassis becoming a touch vague and woolly. There’s more, too. Apart from a gusty rush of intake and exhaust noise at start-up the engine note isn’t very melodious. Along here the V6’s bland howl blends in perfectly with the surprisingly invasive drone of road noise.

But then there’s Synchro Rev Control, which should be filed under ‘why hasn’t this been done before?’. I’ve spent years working on my heel-and-toe gearshifts but this does it far better than I ever will, matching the revs perfectly to whichever gear you select. I try to catch it out, purposely fluffing shifts, going from sixth to thir… fourth, but the revs are always there, waiting. It is utterly brilliant.

Another run along the road, this time in the Porsche. Oooh, it’s magic. The springs and dampers pick the road apart bump by bump, the rock-solid body seeming to skim along, the wheels gently reaching down and massaging the surface, somehow working the knots out of it. There’s a bit of useful squidge from the tyres to soften things off, but steering feel never fades, the Cayman removing all uncertainty, making this road wholly enjoyable. ‘It gives you all the information you need but no more than you want,’ Henry marvels.

Anxious to see if the 370Z can fight back, we’re off to our final spot – a smooth, sinuous section. It takes me three goes to count the 13 bends that flow one into another because I’m enjoying myself so much I keep losing count. I’m in the Nissan, too. It’s great up here, eager to please, eager to make you feel like a hero. It does this very well, even if the experience is a touch one-dimensional: quick steering on turn-in, feel the weight transfer, then the snap of acceleration and the grip/slip out the far side as the diff gets to work. It’s more energetic than the 350Z and tidier, too, but still a slow-in, fast-out machine that lacks the Cayman’s detailed levels of communication and ultimately its depth of ability.

But the Porsche does have weaknesses, besides what it costs and how it looks. It’s serious-minded, the Cayman, technically superb, but a touch… clinical? No, Germanic. The Nissan is emphatically not Japanese, though, more… Australian, I guess. Very self-confident, certainly. It’s a great car to spend time with, real fun and a step on from the 350Z – a bit more focus, a little less gearlever shake. It’s more practical than the Cayman, too, and far more imaginative inside and out.

But as Henry says as we depart, him to Calais, us to Charles de Gaulle Airport, ‘The Cayman is a genuine sports car, the 370Z an entertaining Sports GT.’ That’s the difference, and that’s why the Porsche escapes that duffing-up.

Hyundai’s i30 gets a refresh, and the new i30 N is on its way too
Visit/features/22907/hyundai-i30-fastback-n-versus-the-col-de-turini