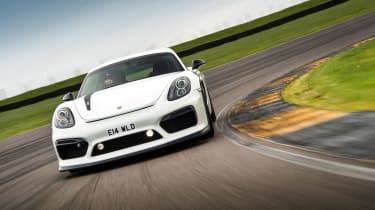 How nice it is to be able to talk about a Porsche Cayman without the gravelly cacophany of the current four-cylinder engine barging its way to the front of the narrative. As a conversion based on the previous, 981-generation Cayman, the car you see here is powered by the direct-injection, naturally aspirated ‘MA1’ flat-six, in this case in 3.4-litre S tune, and that is unequivocally a very good start indeed.

You can apply individual CSR elements to your Cayman, but sampled all together in one car the resulting RPM Technik 981 CSR can be viewed ostensibly as a Cayman GT4-lite, or possibly even a GT4 alternative. The Hertfordshire-based Porsche specialist has built nearly 30 of its more driver-focused CSR conversions over recent years, mainly based on water-cooled 911s. This car showcases RPM’s work on the mid-engined alternative, built up for a keen trackday-attending customer.

> Read our review of the current Porsche 718 Cayman

Frankly, of most interest to me is that this car runs RPM’s own crown wheel and pinion, reducing the final drive ratio and hence supplying the driver with a punchier gearset to work with. There has never been much to criticise with the 981, but its economy-optimised, overly long ratios blunted the accelerative potential of the car – GT4 included – and reduced driver interaction with what is otherwise a superbly slick manual gearbox. RPM has combined the new final drive with a limited-slip differential, plus a lightweight clutch and flywheel assembly, which, I have to break it to you, costs £9300 all-in, yet the thought of those lower ratios is so enormously tempting. 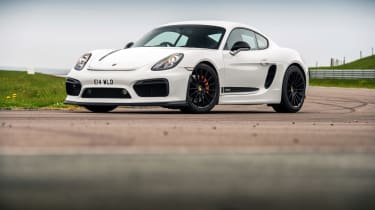 Suspension is now via a set of Öhlins coilovers, with GT4 anti-roll bars and RPM’s own geo set-up, while there are now larger, 355mm floating discs on the front axle, gripped by six-pot calipers. With the additional modification of a lightweight battery, plus lighter seats from OMP, there’s a small overall weight reduction, too.

Engine modifications are confined to a K&N air filter, new exhaust manifolds and a remap, but there’s no change to the exhaust back box, so the CSR is surprisingly quiet from the outside – a practical arrangement for a car aimed at UK track use. Despite such modest alterations, there’s said to be 10 per cent power and torque improvements over the regular S’s 321bhp and 273lb ft.

There’s one burning concern that dominates my thoughts as I wriggle down into the deeply sided bucket. The Cayman GT4 was our 2015 eCoty winner; it is without question one of my all-time favourite cars. Any Cayman that challenges the GT4 is inviting a potentially disastrous comparison, and I wonder whether I should initially push thoughts of Porsche’s ‘real deal’ from my mind to stop this being a bloodbath at RPM’s expense. What I can’t deny, though, is that the CSR looks like it’s itching for the fight, with a GT4 front bumper, a larger rear wing (although nothing like as big as the GT4’s) and 19-inch HRE wheels shod with Michelin Cup 2 tyres.

> Find out what the Porsche Cayman GT4 is like to drive

In reality, the CSR’s character is subtly, but significantly, different, creating clear air between it and the factory car. The biggest divergence is, of course, the engine: the 3.4 hasn’t got the presence of the big 3.8-litre lump in terms of mid-range shove or aurally in the cockpit, but it counters by feeling more focused, more energetic; even, perhaps, angrier. Spurred on by those lower ratios, this is a car that just zips forward with the merest provocation with the throttle, punctuated by a wrist-flick of the short-shift lever into the next gear, the revs dropping off between shifts with the minimum of inertia. It’s an engine that you want to really wring out, and the first time you breach 7000rpm you’ll discover the real sting in the tail: a wide-eyed lunge for the rev limiter and a distillation of the induction note into a singular, piercing howl. Extending the engine throughout its rev range soon becomes hopelessly addictive. 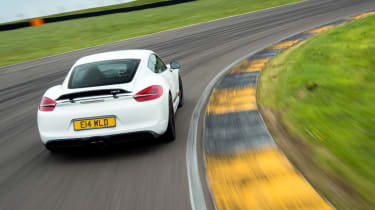 Dynamically, the CSR also has a more insistent, immediate edge to its personality. The Öhlins, set up for lapping a circuit, are very firm for the road, but you can tell they’re quality items because even with backside squeezed into a thinly padded seat there’s enough compliance and polish to their reactions to make the car still more than bearable. Poorly maintained country lanes give it a real workout, but on anything smoother it just feels focused, and fun. The geometry is more aggressive, too, the car turning into corners sharply and continuing to bite hard into your chosen line. It’s like a standard Cayman with all its muscle sinews stretched taut, ready for action.

On the track, the high-speed stability is very apparent, although some of us feel this is at the slight expense of agility through lower-speed curves. Given how adjustable the set-up is, it can surely be tailored to individual tastes.

All of which makes the 981 CSR one of the more appealing modified cars we’ve driven in a while. It may lack the heritage of a GT4, but as an unofficial ‘Club Sport’ interpretation of the Cayman S it’s a fun and effective machine.

As mentioned before, the CSR can’t escape being compared to Porsche’s own focussed Cayman, the GT4. RPM’s CSR is more affordable, just. GT4s are currently £75,000 upwards, while this CSR has cost its owner approximately £40k on top of the price of an S, which these days are available from £30,000. 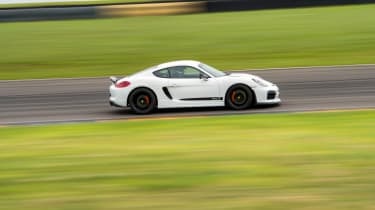