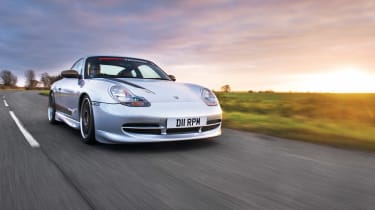 A Porsche 911 of the 996 generation – the first of the water-cooled 911s – given upgrades to improve its reliability, durability and performance.

Porsche specialist RPM Technik believes the older cars are undervalued and has plenty to offer anyone looking for something more focused than a Carrera for a smaller outlay than a GT3.

We’ve sampled the company’s Clubsport-inspired philosophy previously, driving its 380bhp 997 CSR (evo 186). This 996 CSR follows a similar route. Starting with a 996.1, the 3.4-litre engine is subject to an intermediate shaft bearing upgrade as well as borescope and compression tests before being put back together again, complete with a single-mass flywheel and lightweight clutch. All this puts paid to any concerns regarding engine reliability. A short-shift gear linkage is also fitted, as is a Wavetrac Torsen limited-slip differential.

No official 0-60mph time is quoted by RPM Technik, but a 5.2-second dash is the estimate, along with a 174mph top speed. 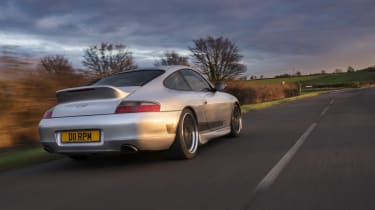 You’ll notice the ride height is GT3-low, which is down to three-way adjustable suspension that benefits from new top mounts and drop links. There are also fresh Powerflex bushes and the anti-roll bars are hollow Eibach items. The ducktail spoiler, like the bonnet, is made from carbonfibre. It may not be to all tastes but it works well with the GT3 side sills and front bumper – in fact the entire car looks suitably GT3-lite.

With a bespoke stainless steel exhaust the CSR sounds devilishly like a Carrera Cup refugee. The drivetrain is inertia free, with every throttle input resulting in an immediate and rapid increase in both engine and road speed. And the short-shift gearchange strikes a neat balance between the slickness of the standard Carrera’s and the accuracy of the GT3’s.

The chassis doesn’t thud, either, and there’s no ungainly tramlining under braking or across aggressive cambers. And it grips. Boy does it grip. RPM has set this demonstrator up to eliminate as much understeer as possible, which in theory sounds great but on the road isn’t always so. Leaning against understeer is helpful for judging what the chassis is doing – when you feel the front tyres finally start to break traction your senses need to be alert and ready to react to a rear axle about to do the same. However, in this case the front end is alert, quickly reacting to driver inputs. Combined with the enormous traction the diff manages to find, RPM’s CSR needs serious provocation to become unstuck and is a 911 that rewards precision. 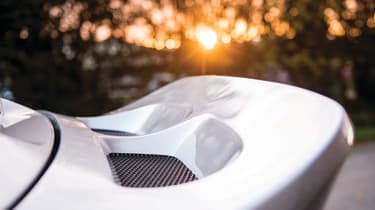 The car is a testament to the work that has gone into it, and RPM has done more than fit a set of trick dampers and give it a fancy name. It has gone as far as building a bespoke, finely focused 996 for the 911 purist who finds a GT3 out of their reach financially and wants something more focused and involving than a similarly priced 997 Carrera S. The CSR hits that spot.

If this little lot doesn’t sound cheap, you’re right – it’s not. Ask RPM Technik to convert your 996 into a CSR and you’ll be presented with a bill approaching £20,000.